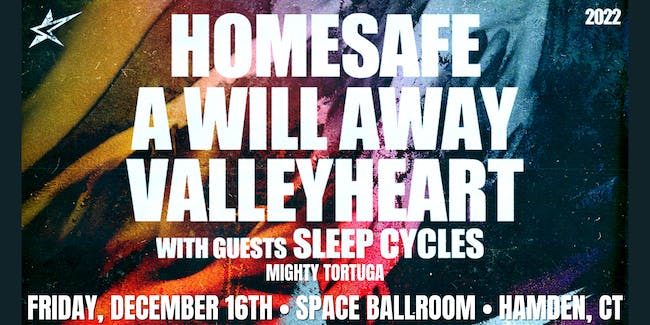 Connecticut rock group A Will Away seemingly came from nothing – limited by location, resources and community – but something this genre-bending band has never been short on is inspiration.

A decade on from playing basements in their hometown, A Will Away have put themselves on the map with rigorous touring and constantly refining their sound to craft catchy and approachable modern rock songs with significant depth for careful listeners. Creating honest and unapologetic music with an endearing blend of grit and charm has always been at the heart of the band’s mission and has earned them a loyal following with three EPs and a debut album under their belts. Relatable lyrics that speak of the hardships in life connect with audiences through a shared love of the human experience, making light of serious matters and exploring the mundane.

Homesafe is a 4-piece rock band based out of the south suburbs of Chicago, Illinois. The band was formed in 2014. After playing their fair share of basements, bowling alleys and weekenders to neighboring states, Homesafe went on their first east coast US tour in 2015. The band has been writing and recording albums as well as touring since then.

Art should incite conversation not only with our friends, family, and loved ones, but within ourselves as well. Valleyheart inspire internal and external dialogue through layers of cinematic alternative rock, lyrical eloquence, and dynamic vocals.

The Massachusetts trio—Kevin Klein [vocals, guitar, producer], Chris Babbitt [bass], and Zakk Nix [drums]—might just make you ponder love and life a little more closely with their second full-length album, Heal My Head [Tooth & Nail Records]. The group canvas the biggest and smallest corners of emotions alike, which has garnered them millions of streams and acclaim from American Songwriter, FLOOD, Vanyaland, and more.

Sleep Cycles is an emotionally driven Punk Rock group from Collegeville, Pennsylvania. Comprised of ex-members of An Honest Year, The Color Fred, Promise of Redemption and The Rescue, these alt rockers put heart into every song and play hard. Formed in 2019, they began releasing songs from their first upcoming EP in 2021.

Mighty Tortuga is an Emo Pop Punk band from New Haven, CT. Featured as one of Buzz Music’s Top 10 Artists of 2019, their sound shows similar signs of 90’s emo power pop alongside the early 2000’s Drive-Thru Records era, with a sense of maturity and relatability. Their new single, “Blind” takes everything you love about My Chemical Romance, and turns it into a modern day emo anthem that shows characteristics of Transit’s “Joyride.” Their highly anticipated sophomore EP, “The Gloom” is out now on all digital platforms.