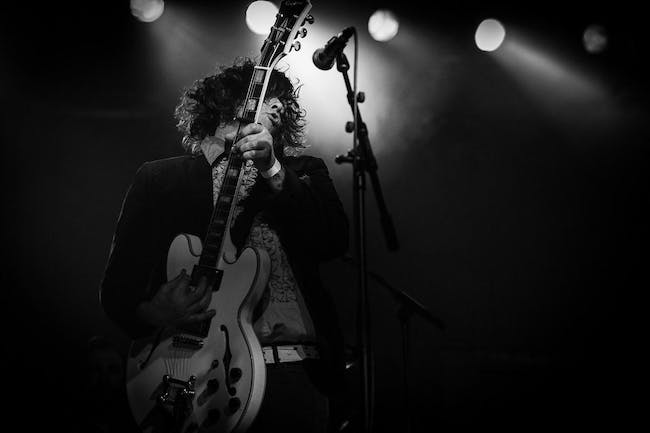 James Alex, songwriter and front man for Philly indie-punk outfit Beach Slang, knows wherefrom he sings. Like a lot of us, Alex is that kid Lou Reed sang about, the one whose life was saved by rock and roll. And A Loud Bash Of Teenage Feelings (Polyvinyl), Beach Slang's second full-length, is just that -- a crash-and-thunder collection of songs about what it takes to keep yourself going, to make it through the rest of the night -- hell, through the rest of your youth -- and beyond.

Coming off a string of acclaimed EPs, Beach Slang's first album, 2015's The Things We Do To Find People Who Feel Like Us, won remarkably effusive acclaim from a number of critics, and wound up on several "best-of-the-year" lists. James wrote much of A Loud Bash Of Teenage Feelings on that album's support tour, during which he spent a lot of time with the kids who'd picked up the record.

"A lot of the songs [on Loud Bash] are the stories of the kids who got turned on to Beach Slang by the first album," says Alex. "They're autobiographical, too, but kind of at a remove -- I'm not that young kid anymore, but I used to be. You know how it is; rock and roll is a new crop of 15-year-olds picking up guitars every year and having at it. There was something really cool about documenting someone else’s life, but seeing myself in it. I suppose that's why we connect. We're all kind of one big gang."

Going into the second record, Alex didn't feel a sense of pressure to match the broad, unexpected success of the first. "What I did feel was a sense of responsibility to the kids who told me they were finding something in our music that brought them back from a bad place, the ones who were getting Beach Slang tattoos and quoting lyrics to me after the shows. I don't want to let those people down. As a 20-year-old, I thought, hey, let's all have fun, we're gonna live forever. You don't really see the finish line. Now it's more like, am I leaving behind work that's going to matter? What's this going to say about me when I run out of air, and my son is listening to these records and tapes that I left behind. Is he going to say, "Yeah, my dad was all right"? These days I feel like I'm responsible for things bigger than myself. And I want to do right by them."

Indeed, Alex is that rare songwriter who can create songs that blend his own Young Man Blues with the grown man's earned perspective. Check the arresting "Punks In A Disco Bar" and "Spin The Dial" for his skill at merging full-throttle hooks with memorable, whip-smart lyrics, or "Art Damage" and "Wasted Daze Of Youth" for a lesson in how rock and roll can be sinister and dissonant, and still end up beautiful.

For all the volume and the fuzz and the fury, Beach Slang is a band for sloppy romantics who got there the hard way ("I still taste you in the ash / of every cigarette you kill," sings Alex). And that's how the band wants it: "Whether this Beach Slang thing flies or falls," says Alex, "we want to know that we put everything into it. We're a rock and roll band; we make records and we tour. We want to sweat it and bleed it. We want to do it like the bands we love and respect did it.

I have a full, beautiful life. But you know how some people have the 'god hole'? I have the rock and roll hole. I'm that kid with the posters on his wall. Whether I'm right or I'm wrong, I've convinced myself this is why I'm here." Beach Slang -- plug it in, turn it up, and let it scream.”

5-piece indie-alt rock group, Mandala, evoke an atmosphere that is all their own in their records and live performances. Self-described as, “sad music you can dance to” they elevate their listeners with energetic tracks like “Washed Up” and “Heavy Sleeper” while simultaneously exploring such concepts as addiction, loneliness, and failed romance. Nearly five years ago founding members, Abe Azab (Guitar) and Morgan Fasanelli (Vocals), and the first iteration of the band embark on an idea that would endure challenge after challenge as well as multiple lineup changes. The pair eventually found a solid guitarist in Chris Desiderio. It was with him that Mandala produced their now coveted EP, Ruby. Before their collaboration on this project, however, the new lineup made their way around the Northeast with former drummer Jake Crosswait and former bassist Mike Plourde as a last gasp for air. Seemingly down and out after the tour, the now trio (Morgan, Chris, and Abe) invited the substitute bass player they hired, to fill in for Plourde for part of the tour, to join. The new bassist, Matt Rosano, in turn invited long time friend and drummer, Sean Connelly. This new lineup renewed the bands motivation and sense of self from their first rehearsal together. Finding their groove immediately, they took off running. Writing and recording their newest release Cash For Smiles in a year since forming. Mandala is currently gigging as much as possible and traveling as far as their cars will let them. Playing shows big and small like Northside Festival, Warped Tour, RAW Arts Fest, Oakdale Theatre, and all the clubs and DIY venues you can find. They’ve released an official music video for their song “Motel Lobby” as well as live video sessions from the rooftops of New Haven.

Mamma's Boy combines somber tones and crunchy riffs with pop punk harmonies and heart-wrenching lyrics. After tragedy struck Justin and his family, he needed a creative outlet to get those feelings out. Writing for different projects at the time, Charlie and Justin bonded over their love of bands like Modern Baseball and songwriters like Kevin Devine. In the fall of 2018, they started Mamma's Boy with longtime friends Benji, Keith, Patrick and everyone's favorite Norwegian - Helene. Justin's lyrics tell real stories about young love, shocking loss, and the hardships involved with both. They recently released a new EP titled, Cake, and plan to release some new music by the end of the year.