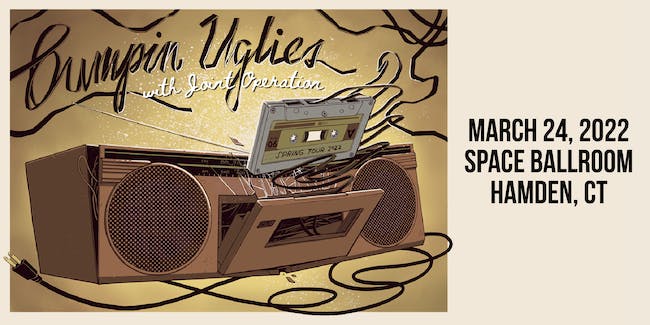 By purchasing tickets to this event, you agree to abide by the State of CT, City of Hamden, Artist, and Space Ballroom’s Health and Safety measures in effect at the time of the event, which may include, but not be limited to, providing proof of vaccination status for patrons ages five (5) and older and/or providing proof of negative COVID-19 test within 72 hours of event time. Check back for updates to your event on our website as guidelines and entry requirements are subject to change.

The trajectory of Bumpin Uglies started over a decade ago, making music with friends, playing backyard parties and anywhere else they could get a gig. For Brandon Hardesty, lead vocals and guitar, it was a simple time, but one that taught him lessons that stay with him today as he leads the band into the 2020s. One was that he would do whatever it took for him and his band to be successful. Another was in discovering that doing it his way was the only way, which still applies today. Bumpin Uglies do things their way, free to play, think, and write however they feel, critics and the mainstream music industry be damned.

In the early days, Hardesty was hustling waiting tables while stoking his musical fire with every minute of free time he had. A point came years ago when he knew it was time to put up or shut up if he was going to make a career as a musician, so he dug into doing all of the things it takes to grow Bumpin Uglies from a grassroots local band into a nationally touring act. It took a tireless DIY ethic; and it still does, but if Brandon did not have the singular focus on breaking through and achieving his musical dreams, the story of Bumpin Uglies wouldn’t be what it is today.

Bumpin Uglies are a band that have hoisted themselves up and forged their own path, but even as they look around at where they are, how far they have come, it is clear to them that there is so much more work to do and they continue to do it every day. With the help of bassist Dave “Wolfie” Wolf, drummer TJ Haslett and keyboardist / master shredder Chad Wright, they are doing just that.

Bumpin Uglies recently came off the road, having to cancel their spring tour due to COVID-19. Brandon and the boys have been keeping their rabid fan group “Uglies Nation” entertained with full band live streams, hosting socially distant concerts and even a few Drive-In concerts until the world slowly gets back to a place where Bumpin Uglies can tour once again.

Fresh off the successful release of full length, “Keep your suitcase packed.”, they are in the midst of a new project called “The Never Ending Drop." The concept is simple, yet groundbreaking..

"For the last ten years, we’ve been on what feels like the never ending tour. So in a year where the tour is forced to stop, we decided to double down on the music making portion of our job description," Hardesty explains. The band released their first single, "Fear," in October and plans to release a single per month indefinitely on the second Friday of each month. Be sure to check out the new material on Spotify or wherever you stream music.

Looking into the core of their music, you can hear influences of bands they all grew up loving. A little like the musicianship of the Beatles mixed with the funkiness of RHCP, throw in some Devo stage action, and you got JO. With the filling sounds of Josh Lewis’ powerful vocals and Mike Busch's savory guitar licks, you will be up and feelin' the music in no time. Accompanying them, is the rhythm section made up of Daniel Gallagher’s funky bass hits that are always right in the pocket with drummer Fabrizio Scotto’s hard-hitting fills and snaps. Joint Operation values the idea of connecting with others through their music, while giving the audience a live performance they will never, ever forget. The band hopes to create music and play live shows to help others forget the struggles of life, while screaming out their problems at the top of their lungs. JO brings feeling.

Their debut album, “Scuffed” was released on July 27th, 2019. Gaining over 26,000 streams in the first week. Now reaching over 148,000+ streams less than a year later. Accompanying this release was a SOLD OUT album release show at the 8x10 in Baltimore, MD. This record focuses on talking about life, happiness, and struggles, while bringing in the party with the lively music of their mixed genres.

During the COVID-19 pandemic, the band took to the studio and wrote like never before. On December 4th, 2020, the single "Overlooked" dropped from their upcoming record. Gathering 46,000 streams within two months. February 19th, 2021, the group dropped their sophomore release "The Thrill of Stress", gathering 88,000+ streams on Spotify alone in less than a month.

Joint Operation is about expressing yourself, making what you love, and not giving a damn about the naysayers. JO is always trying to be greater. With huge performances, and countless tours under their belt, they are ready to travel farther out and share their music with others. They hope to push themselves harder and celebrate music and art with others all over the globe!