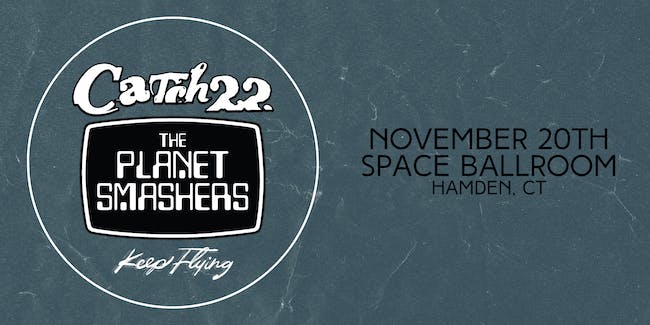 New Jersey ska-punk combo Catch 22 were formed in the autumn of 1996 by singer/guitarist Tomas Kalnoky, trumpeter Kevin Gunther, and drummer Chris Greer. Recruiting bassist Pat Calpin, trombonist Jamie Egan, and saxophonist Ryan Eldred, the group spent the next two years touring relentlessly, selling out all 2,000 copies of its self-released demo, Rules of the Game. Signing to Victory Records in late 1997, Catch 22 issued Keasbey Nights the following year, quickly becoming one of the best-selling bands in the label's history. The grind of touring ultimately became too much for Kalnoky, however, and upon his exit from the roster (he would later go on to front ska-punks Streetlight Manifesto), the remaining members of Catch 22 tapped new frontman Jeff Davidson; with Calpin then assuming guitar duties, new bassist Pat Kays was brought aboard for the 1999 EP Washed Up! Alone in a Crowd followed a year later. Davidson departed the band in March 2001, and Catch 22 were still looking for a replacement when November's Washed Up and Through the Ringer was released. The album was a sort of compilation; it contained the Washed Up! EP and some rare tracks, along with several live cuts and two new songs that found Gunther and Eldred sharing vocals. This vocal dynamic continued for 2003's Dinosaur Sounds, an album met with mixed fan response. Catch 22 Live appeared in October 2004; an accompanying DVD included bonus features and live footage shot the previous August at the Downtown in Farmingdale, NY. The band continued touring, including a stops at 2006's Bamboozle and Warped Tour festivals. Catch 22's next full-length was a concept album that followed the life of Bolshevik revolutionary Leon Trotsky, entitled Permanent Revolution. It was issued in June 2006; the band later headlined a nationwide tour with Voodoo Glow Skulls, Big D & the Kids Table, Suburban Legends, and more in tow. ~ Jason Ankeny, Rovi

That’s right. The Planet Smashers have somehow managed to survive a quarter century of worldwide touring, non-stop partying and extremely questionable life decisions. An absolute staple in the Canadian music scene, The Smashers have been slinging their two-toney, punky, new wavee party ska to the four corners of the earth with an unapologetic middle finger raised on one hand and a double mai-tai cocktail firmly gripped in the other. The band has faced way more than their fair share of adversity over the years but have always managed to maintain an unequivocally positive and often hilarious approach to life; and this admirable attitude comes shining through in every single one of their songs.

Too Much Information is The Planet Smashers’ ninth full-length album and adds another illustrious set of bangers to their 25 year legacy of unbelievably addictive songwriting and defiant debauchery. These fourteen songs run through a diverse collection of themes ranging from the culture of over-sharing (Too Much Information) to being obsessed by love (Can’t Stop) to eating far too much ice-cream (Brain Freeze) to that one time a couple years back when Matt Smasher broke his neck in four places after a show in Sherbrooke (Break My Neck A Love Song). One thing’s for damn sure, you just can’t keep a good band down.

Hailing from the northeast region of the USA, Keep Flying blends musical styling borrowed from a few different genres & eras. Crossing a mix of late 90’s skate punk with the aggression of early 00’s pop–punk, the band stretches a spectrum of taste that appeals to multiple audiences. Add the brass/woodwind section as reigns to the hyper-performance live show of a sleigh and you have what becomes a whirlwind of excitement behind a lyrical wall that can be easily relatable to many listeners. At its core, the band message is hands down represented by their name: Keep Flying.