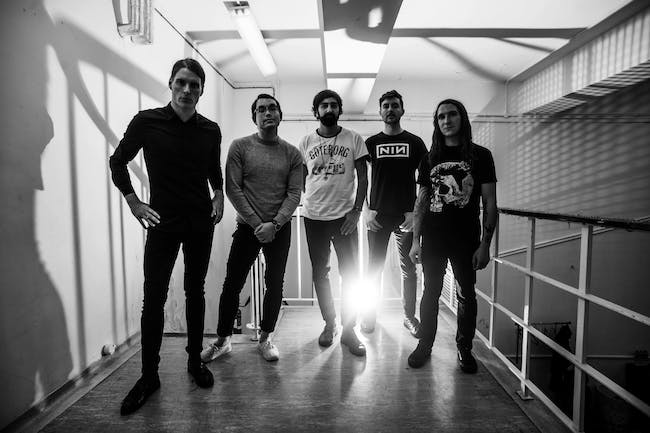 In the interest of public health, Deafheaven has CANCELLED their 4/14/21 show. Refunds available at point of purchase. If purchased via credit card, refunds will automatically be issued to the card you used to purchase tickets within 30 business days.

Deafheaven is a California-based act that has garnered acclaim for their signature hybrid sound of black metal, shoegaze, and post-rock. On October 2 the band will release their next album New Bermuda on ANTI-.

George Clarke (vocals), Kerry McCoy (guitar), Dan Tracy (drums), Stephen Lee Clark (bass), and Shiv Mehra (guitar) recorded New Bermuda live to tape at 25th Street Recording in Oakland, CA and Atomic Garden Recording in East Palo Alto, CA in April 2015. It was produced, engineered, mixed, and mastered by Jack Shirley who has worked with the band on their previous releases. Clarke says that he came up with the idea of “New Bermuda” to describe a new destination in life, a nebulous point of arrival, and an unknown future where things get swallowed up and dragged into darkness. The album artwork for New Bermuda is an oil painting, dense in brush strokes of darker tones and deep blues, by Allison Schulnik. The layout was designed by art director Nick Steinhardt.

Formed in 2010 in San Francisco, California, the band has released two studio albums on Deathwish; Roads to Judah in 2011 and their lauded Sunbather in 2013. Sunbather received accolades from NPR on their Favorite Albums of 2013 list, a coveted Best New Music at Pitchfork, the Best Metal Album of 2013 per Rolling Stone, a 9/10 star review from Decibel Magazine, and it was the highest rated album of 2013 according to Metacritic. Deafheaven have spent the last two years touring extensively nationally and around the world with shows in Australia, Japan, Asia, Europe, Russia, the UK, and Canada with festival appearances at Pitchfork, Bonnaroo, Primavera, Roskilde, Fun Fun Fun, FYF Fest, SXSW, Basilica Sound Scape 14, Corona Capital, ATP Iceland, amongst others. Deafheaven will perform August 8 at Heavy Montreal in Canada. Details on a forthcoming North American tour are soon to be announced.

“‘Middle finger’ might be the best way to describe some of it.”

That’s Inter Arma vocalist Mike Paparo talking about the band’s new album, Sulphur English. “It’s definitely a fuck-you to people,” he adds. “I wish it was more eloquent than that, but it’s not.”

After 13 years and three full-lengths, these Richmond, VA-based extremity artists are throwing down the proverbial gauntlet with their fourth. Though the band has never really fit into any of underground metal’s ever-splintering subgenres, they’ve often been lumped into the “sludge” or “doom” factions—largely by folks who haven’t been paying attention. “We do share qualities with those types of bands, but we’re not that,” Paparo points out. “We’ll get to a lot of cities and the promoter will be like, ‘Oh, here’s our local talent, Doomfuck. They’re playing with you guys tonight.’ But we all hate that.’”

Sulphur English is the result of that hate. From spiraling death marches (“A Waxen Sea”) and primeval dirges (“Howling Lands”) to fireside acoustic passages (“Stillness”) and roiling power jags (“The Atavist’s Meridian”), the album is Inter Arma at their most unconventional and severe. “I don’t think this record is what people would expect from us,” Paparo ventures. “I think maybe people thought we’d take another trajectory, like a more accessible route or something like that. That’s definitely not what this is.”

Before drummer and primary songwriter T.J. Childers even started working on material, the band knew they wanted to do something different this time around. “We wanted the record to be uglier and more fucked up,” Paparo explains. “In the early stages of the songwriting, we could tell this was gonna be darker and heavier than probably anything we’ve done before. It’s way more death metal, which is something all of us like but wasn’t used as much as a songwriting tool in the past. Definitely now it is.”

In some ways, Paparo views Sulphur English as a reaction to its critically acclaimed predecessor, Paradise Gallows. “I felt like Paradise Gallows was a very colorful record,” he says. “This record is not. It’s fucked and it’s dark and it doesn’t let up. We love Paradise Gallows and everything about it, but that’s the last record that will be like that. We’re not gonna write ‘Primordial Wound’ part two. Obviously, certain songs are gonna have certain characteristics of what we do, but we don’t wanna get stuck in a formula. We’re not gonna write variations of the same riff over and over again and slap a sticker on it.”

The title Sulphur English started as the name of the album’s 12-minute closer, the lyrics of which mark new territory for Paparo. “That song is political, which is something I haven’t done before,” he says. “It’s still kinda strange to me, but it’s what I was feeling. So ‘Sulphur English’ is basically a stupid way of referring to political rhetoric. When politicians speak, it’s stinking rhetoric.”

Paparo says the song “Howling Lands” is also vaguely political. “It’s very, very veiled, but it’s social commentary saying, ‘Hey, if you let these people walk all over you, this is what’s gonna happen,’” he offers. “If you let your material stuff and your ego get in the way, these people will control you. You’re gonna be a pawn to these elite scum.”

On songs like “The Atavist’s Meridian” and “Citadel,” Paparo looked inward for inspiration. “This record has some of the most personal lyrics I’ve ever written,” he explains. “I’ve been suffering from depression forever, as cliché as that is, so ‘Citadel’ is basically like an anthem for me. Like a ‘Hey, you can get through this shit’ type of deal, because when we recorded it, I was in the throes of that kind of crap. And I felt like I had to write the song ‘The Atavist’s Meridian’ for somebody in particular. It’s like a reconciliation.”

Other lyrics—like those to “Blood On The Lupines”—will remain forever unexplained. “That one I’m never gonna reveal,” Paparo says with a laugh. “Some of it is based on a dream, but some of it is based on something else. It just kinda came to me. But it’s deeply personal.”

Despite all the new territory being covered both musically and lyrically, Sulphur English isn’t an experiment. It’s not Inter Arma testing the waters. It’s a necessary step in the evolution of a band whose music remains unclassifiable. “The record is not us trying something,” Paparo says. “This is us doing it. We’re all fans of abrasive, fucked up shit. It’s not like we’re trying to reinvent ourselves. It’s more like it’s coming to a head now.”

“I feel like this record is us stepping away from the world we’ve been put in before,” he adds. “We’re a weird band—I get that. We’re never gonna find a nice little niche to fit in, but I don’t think any of us were interested in where we were sitting before.

“This is a progression into a different kind of world. What that is, I don’t know.”