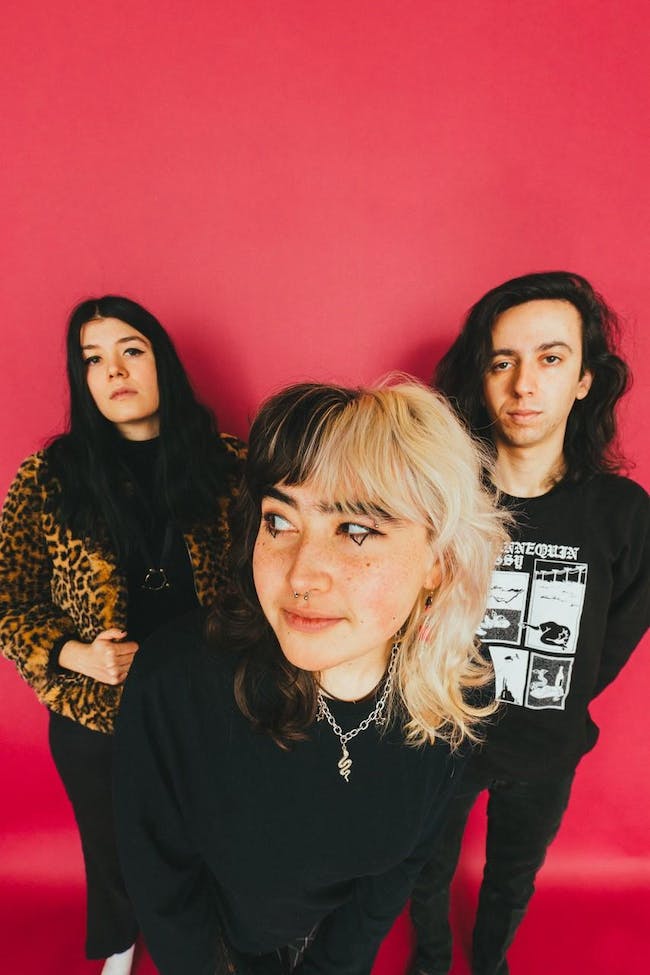 “California punk rock changed my life. It showed me exactly what I want to do and who I want to be,” says Violet Mayugba, guitarist and singer for San Francisco-based punk band Destroy Boys. At the age of 15, Mayugba and band co-founder Alexia Roditis were going to show after show, becoming a part of the vibrant Sacramento scene. “Vi and I were both like, ‘Let’s start a band!’” says lead vocalist and guitarist Roditis. “I was going to play drums and Vi was going to play guitar. I showed Vi a song I had, I didn’t even actually sing it, it was just a voice memo,” they remember.“ Vi said, ‘No. You’re going to be our singer.’”

The more established artists in the scene were welcoming to the new kids on the block, and the band began to make a name for themselves. Since those early days playing shows in tightly-packed garages and releasing music on their own, Destroy Boys have made waves from the California shoreline to the UK, sharing stages with up and coming bands like Mannequin Pussy as well as punk stalwarts such as Face To Face and Lagwagon. They’ve also racked up over 40 million streams, with the numbers ticking upward every day without fail. And their visceral, personal tales of scene bullies, elitist cliques, betrayal and unrequited love have won over the hearts and ears of eager listeners ranging from the fervent teens who pack out their shows to Green Day’s Billie Joe Armstrong. Now, Mayugba, Roditis, and drummer Narsai Malik are embarking on a new journey, this year signing a deal with California-based label Hopeless Records.

“We’re really excited to be in a place where we can create the album we want to create,” explains Roditis. “[Hopeless] took our project very personally; they were really excited about us, and they don’t seem to want to infringe on what we have. They want us to maintain our own vision,” they add. “They’re super down with what we’re about.”

The band also appreciates that Hopeless has more women on their team. “Most of the other labels we’d been talking to didn’t, and it’s important to me to have more than just a male perspective - there should be lots of perspectives,” says Roditis. From the photographers with whom they work to the personnel in the studio, it’s very important to Destroy Boys that their team be diverse and inclusive. Mayugba and Roditis have been harassed by men at shows, put in uncomfortable situations, and there was no one to help. “Men have made the rules, and those rules fuck everyone else over. Having more women and nonbinary people behind the scenes, which is where [a lot of] the power is, will hopefully curtail the abuse in the industry,” Roditis feels. “It’s important to have women, and queer people, people of color, and differently-abled people in all aspects of the music industry, to have that support. And now we’re able to have more of a say in who we work with, and when you have that kind of control, you should do good with it.”

The group released their first single “Muzzle,” this past February - a hard-hitting track exploding with aggression and energy, inspired Mayugba’s experience being disregarded and mistreated by a man she was in a relationship with. They followed up with “Drink”, a song that Roditis wrote to address the cycle of addiction that can span generations of a family, “Locker Room Bully” which addresses the half-truths, misrepresentations and bullying that are rife on the internet, and most recently “All This Love” which speaks to being true to yourself before involving yourself in a relationship with someone else.

While the band’s touring trajectory was momentarily checked by the pandemic, their online presence only grew. But the virtual support pales next to the connection the band has to their fans live. Now that they are about to resume their live shows with another US headline run Mayugba says “We are all itching to get back on the road. Touring is our favorite thing to do when we aren’t working on new music, and we all miss it from the bottom of our hearts.”

"One of the most gritty, sludgy, hard-rocking bands on the New York City scene right now is Jigsaw Youth. The trio of Nastacha Beck on guitar, Maria Alverez on bass and vocals, and Alex Dmytrow on drums crank out high-decibel, savagely executed, post-grunge songs filled with angst, guts, and lyrics that range from everything from alienation to self-empowerment." - The Aquarian Weekly

The Umbrellas are a 4-piece jangle-pop group who made their debut into the SF diy pop scene in 2019 with their self-recorded and released tape, the "Maritime E.P.", now available as a 7" by Syncro System Records.