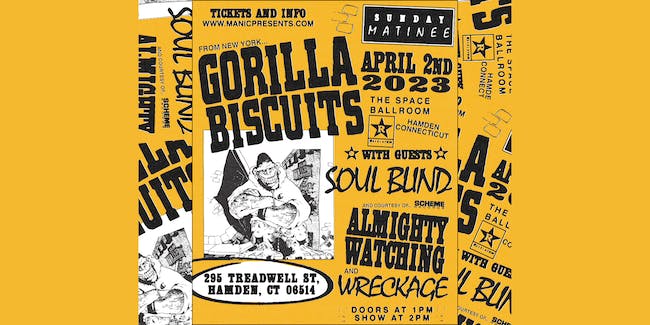 Hardcore icons Gorilla Biscuits came together in the late '80s to add their two cents to the straight-edge scene in New York City. Ironically enough though, their name came from the street term for Quaaludes. The group went through various members in their time together, but the band's "definitive" lineup was the team of vocalist Anthony Civarelli, bassist Arthur Smilios, drummer Luke Abbey, and guitarist Walter Schreifels and (eventually) Alex Brown; John "Porcell" Porcelly (guitar) and Sammy Siegler (drums) also served in the Biscuits' ranks. No last names were used on any of their recordings; in fact, Civarelli went by the name "Civ" at the time. They were very reactionary, trying to move the movement away from the militant rules that many hardcore straight-edge fans had created around their favorite bands. The main goal was to try and include anyone who wanted to take on their political views without worrying about the aesthetics, something that made them unpopular with many in the movement. They managed to tour the U.S. once and Europe twice, and release two albums on Revelation Records (a 1988 self-titled 7" and 1989's highly influential Start Today) before Schreifels left the group to form the melodic hardcore/metal band Quicksand in 1990. Gorilla Biscuits were officially broken up, playing a final gig together in 1992, but in reality the remaining members turned around and formed CIV, a pop-punk combo that scored a minor hit with "Can't Wait One Minute More" when they reappeared on a major label in 1994. Gorilla Biscuits reunited in 2005 during the Save CBGB's campaign (when the famed venue was on the brink of closure), which ultimately led to the band embarking on a subsequent nationwide tour. ~ Bradley Torreano, Rovi

Soul Blind are a four-piece Rock band based in Hudson Valley, NY. The group's sound brings to mind the swoon-worthy guitar rock of Hum, Swervedriver, and Deftones, and touches upon the fuzzed out sound of 90’s Alt-Rock. They have been self-releasing music since 2018 and most recently compiled their recorded material to-date as a “Greatest Hit’s Vol 1” release. They’ve shared the stage with artists such as Death Threat, Fiddlehead, All Out War, and Vein.