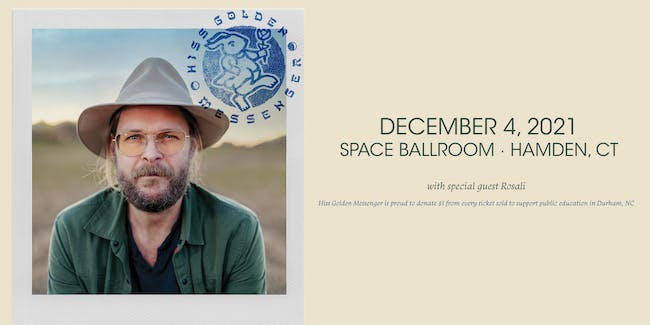 $1 from every ticket goes to support the Durham Public Schools Foundation whose mission is to foster community support for public schools and invest in our students, educators, and families to ensure success and equity for every student.

“I went looking for peace,” says songwriter M.C. Taylor of Hiss Golden Messenger about his new album Quietly Blowing It, out June 25, 2021, on Merge Records. “It’s not exactly a record about the state of the world—or my world—in 2020, but more a retrospective of the past five years of my life, painted in sort of impressionistic hues. Maybe I had the presence of mind when I was writing Quietly Blowing It to know that this was the time to go as deep as I needed to in order to make a record like this. And I got the time required in order to do that.” He pauses and laughs ruefully. “I got way more time than I needed, actually.

”Quietly Blowing It was written and arranged by Taylor in his home studio—his 8’ × 10’ sanctuary packed floor to ceiling with books, records, and old guitars—as he watched the chaotic world spin outside his window. “Writing became a daily routine,” he explains, “and that was a ballast for me. Having spent so much time on the road over the past ten years, where writing consistently with any kind of fl ow can be tricky, it felt refreshing. And being in my studio, which is both isolated from and totally connected to the life of my family, felt appropriate for these songs.” Between March and June, Taylor wrote and recorded upwards of two dozen songs—in most cases playing all of the instruments himself— before winnowing the collection down and bringing them to the Hiss band. In July, the group of musicians, with Taylor in the production seat, went into Overdub Lane in Durham, NC, for a week, where they recorded Quietly Blowing It as an organic unit honed to a fine edge from their years together on the road. “We all needed to be making that music together,” he recalls. “We’ve all spent so many years traveling all over the world, but in that moment, it felt cathartic to be recording those particular songs with each other in our own small hometown.”

Throughout Quietly Blowing It, Taylor brings his keen eye to our “broken American moment”—as he fi rst sang on Hiss Golden Messenger’s critically acclaimed, GRAMMY®-nominated Terms of Surrender—in ways that feel devastatingly intimate and human. Beginning with the wanderer’s lament of “Way Back in the Way Back,” with its rallying cry of “Up with the mountains, down with the system,” Taylor carries the listener on a musical journey that continually returns to themes of growing up, loss, obligation, and labor with piercing clarity, and his musical influences—including classic Southern soul and gospel, renegade country, and spiritual jazz—have never felt more genuine. Indeed, Quietly Blowing It is a distillation of the rolling Hiss Golden Messenger groove, from the rollicking, Allman-esque “The Great Mystifier” to the chiming falsetto soul of “It Will If We Let It,” to the smoky, shuffling title track with its bittersweet guitar assist from Nashville legend Buddy Miller. The album ends with soulful lead single “Sanctuary,” a song about trying to reconcile tragedy and joy, with references to John Prine (“Handsome Johnny had to go, child…”), economic disparity, and the redemptive quality of hope. Indeed, when he sings, “Feeling bad, feeling blue, can’t get out of my own mind; but I know how to sing about it,” it feels like the album’s spiritual thesis. Throughout Quietly Blowing It, Taylor reckons with the tumultuous present in wholly personal terms, encouraging listeners to do the same. “These songs always circle back to the things that I feel like I have a handle on and the things that I’m not proud of about myself. When I think of the phrase ‘quietly blowing it,’ I think of all the ways that I’ve misstepped, misused my gifts, miscommunicated. ‘Born on the level, quietly blowing it.’ That’s what’s on my mind there. Always fuckin’ up in little ways.”

Surrounding himself with a trusted cast of collaborators that includes Miller, songwriter Gregory Alan Isakov, songwriter and Tony Award–winning playwright Anaïs Mitchell, multi-instrumentalist Josh Kaufman, Dawes’ brothers Taylor and Griffin Goldsmith, and his oldest musical confidant Scott Hirsch, Taylor has made his most audacious and hopeful work yet with Quietly Blowing It; it’s an album that speaks personal truth to this moment in which the old models of being feel broken and everything feels at stake. “I don’t know that the peace that I crave when I’m far from home exists, actually,” says Taylor. “It’s more complicated. I still don’t know what peace means for me, because I can be sitting on the couch watching a movie with my family and be completely tangled up in my head. But if I keep on doing my own personal work on myself—writing records like Quietly Blowing It—I have to think that I’m getting closer.”

Philadelphia / Michigan musician Rosali (Long Hots, Wandering Shade, Monocot) contemplates life's deeper meanings and surrenders to self-discovery through songwriting, often using the structure of love songs to explore the emotional spectrum of things that one cannot label so easily. Her writing expresses the universality of human nature and shares honestly and personally about loss, love, aging, suffering, confusion, self-doubt and anger. Rosali’s music deals with existence and how it permeates through the self and back into the world, transmuting these emotions into songs, condensing the deep time of the universe into daily life. As fellow musician Meg Baird described her: "...the natural, warm resonance of her vocal performances share more than anything prescriptive, contrived or confessional ever could. It’s a power that comes from Rosali singing these incredibly crafted songs in her very own voice. She walks that tight line effortlessly, inviting the listener in without swallowing them up whole or needing anything back in return. These songs aren't for Rosali, they’re for you." Her third LP, No Medium, was released in May of 2021 and features members of Omaha country-rock outfit, David Nance Group, for a barn-burner of an album, Linda Rondstadt meets Crazy Horse.