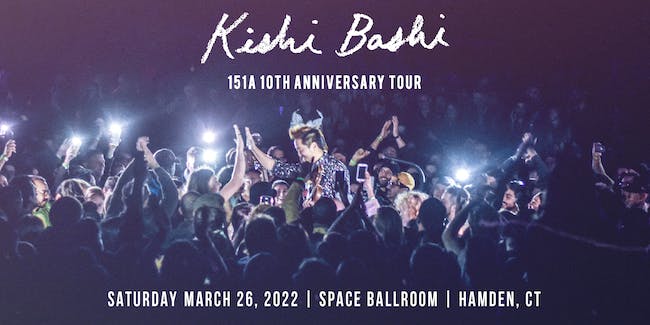 By purchasing tickets to this event, you agree to abide by the State of CT, City of New Haven, Artist, and Space Ballroom Health and Safety measures in effect at the time of the event.

Kishi Bashi today announced a tour celebrating the 10th anniversary of his beloved debut album, 151a. The March/April 2022 run will take Kishi Bashi and his full band throughout the eastern U.S. and into Canada, and see them performing the album in full alongside additional songs from his catalog. A current itinerary is below and tickets go on sale this Friday, December 10th at 12pm local time.

Released in 2012 via Joyful Noise Recordings, 151a established Kishi Bashi—née Kaoru Ishibashi—as an artist to watch in his own right, following years performing as a multi-instrumentalist with artists including Regina Spektor and Of Montreal. The album earned praise from NPR’s Weekend Edition Saturday, NPR Music (‘Best Songs of 2012), Interview Magazine, and more.

In April, Kishi Bashi released his acclaimed Emigrant EP, a six-song collection that serves as a time capsule of 2020 as it meditates on the anxieties of the COVID-19 pandemic, the comforts of nature, the pains of resource-fueled conflicts, and the resiliency that emerges from struggle. The collection earned great press from The AV Club, NPR Music's All Songs Considered, No Depression, Bluegrass Situation, and more, including an invitation to participate on NPR's Morning Edition’s Song Project series, where he debuted his new, poignant and musically grand original, "For Every Voice That Never Sang." The EP was his follow up to 2019’s album Omoiyari, which channels the hard-learned lessons of history by reckoning with the country’s past internment of Japanese-Americans during WWII. The album earned glowing press from The New York Times, NPR’s All Things Considered, NPR Music (‘First Listen,’ ‘New Music Friday’), Billboard, The New Yorker, Noisey, Smithsonian Magazine, Relix, Paste, Exclaim!, and many more.

Tall Tall Trees​ is the pseudonym of songwriter and multi-instrumentalist ​Mike Savino​. Moving to New York in the early aughts with aspirations of being a bassist in the city’s vibrant jazz and experimental music scene, Savino soon switched his focus to banjo and writing songs, resulting in the eponymous 2009 debut, Tall Tall Trees. In the decade since, Savino has toured non-stop, pioneering a world of psychedelic electric banjo music, captivating audiences with his loop-based one man shows, as well as alongside frequent collaborator, Kishi Bashi.

A Wave of Golden Things, his fourth studio album, opens with the distant crow of a rooster and takes off in a dust cloud of swirling banjo, drums and bass. The lead off track, “The Wind, She Whispers,” quickly evolves from a droning mountain melody into full-blown banjo funk, setting the precedent for an album of unexpected turns. Though the banjo is heavily featured, the influence of Pink Floyd, and Cat Stevens can be felt as much as banjo mavericks Earl Scruggs, and Bela Fleck.

Savino, who self-records and produces his music, abandoned the heavily-layered textures of 2017’s Freedays for a more organic, stripped-down approach, leaving his distinct voice and thoughtful lyrics as the centerpiece. Despite the sparse arrangements, Savino still manages to evoke the sonic imagery and pastoral landscapes that have often been hallmarks of Tall Tall Trees albums. Each of the eight songs that make up A Wave of Golden Things suggest a world unto itself, from the cosmic country-tinged, “Ask Me Again,” to the sprawling underwater lullaby “Deep Feels.”

Opting for an immersive experience over a traditional studio, Savino set up residence and a mobile recording rig on a hemp farm in the Appalachian mountains outside of Asheville, North Carolina, where he now resides. Recorded in just under three weeks, with much of it arranged on the spot, the album maintains a sense of immediacy, celebrating raw performance over perfection. “I’m giving up on my expectations, let them go and see where it takes us,” Savino sings on “Expectations,” almost seeming to revel in this experimental process.

Savino’s voice, left unadorned, can be simultaneously gentle and strong, at times sage-like in delivery. On the album’s closing title track “A Wave of Golden Things,” his soft spoken meditations on mental health reflect a new maturity in his song craft and singing. As the song develops, Savino’s voice gains confidence and his whisper becomes a fragile cry, neither full-throated nor fully secure, but at home in a warm bed of upright piano and echoing tape delay. “We all need a little peace and love right now,” he sings as if he’s at the end of his breath.

Reflective of the dark and challenging times of today, Savino’s message is ultimately one of hope and finding peace of mind in the chatter of the modern world. The last chorus reaches towards a transcendent beauty in the darkness, and makes a promise: “a wave of golden things, it waits for you.”