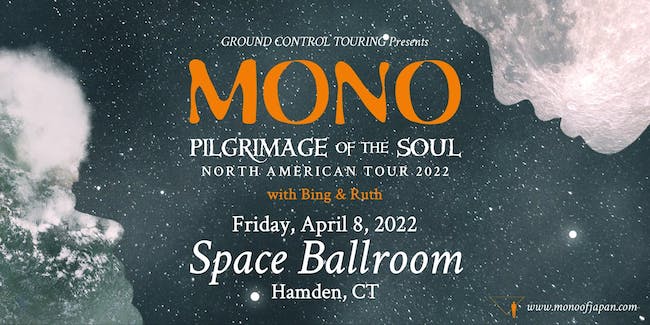 The Tokyo, Japan based 4-piece Instrumental Rock band MONO was originally formed in 1999. Their unique approach of combining moving orchestral arrangements and shoegaze guitar noise is held in extremely high regard; so much so, that the band’s musicianship and the diverse musical palette has eclipsed the Rock genre and exists within its own realm. As British Musical Magazine NME once stated, “this is music for the Gods”.

Over the first decade, MONO rapidly established a well-acclaimed status, especially with their live performances. Through their annual world tour consisting of around 150 shows, visiting now over 59 countries, both critics and fans of Rock music agree their sheer euphoric, dynamic resonance of performance make MONO one of the best live bands in existence. A particularly monumental early live memory was special set of orchestra shows celebrating the 10th anniversary in New York, Tokyo, London and Melbourne; which was later immortalised as the live album “Holy Ground”. MONO now also proudly holds the title of being one of the most internationally successful bands in Japan.

Outside of the studio and live music, MONO has also made its name as a film score composer. After releasing 10 successful albums including the live album with an orchestra, the band received the highly regarded award “The Marshall Hawkins Awards: Best Musical Score - Featurette” from the Idyllwild International Festival of Cinema for their collaborative short film “Where We Begin” in 2015, and the band was also nominated for “Ariel Award for Best Original Music Score” for the feature film “The 4th Company” which was released in 2016.

In 2018, MONO began a new journey. After welcoming the new drummer Dahm, the band started to prepare for their second decade’s celebration and during this time, they received a special invitation to be one of the headliners of London’s Meltdown Festival, personally requested by the 2018’s curator Robert Smith of The Cure; an unforgettable gesture and honour for the band, from one of the band’s long-time inspirations. The stage was then shared with artists such as My Bloody Valentine, Nine Inch Nails, Mogwai and Deftones.

The band’s 20th anniversary was welcomed in the following year. To commemorate this occasion, the 10th album “Nowhere Now Here” was released alongside a year-long world tour, consisting of 4 special orchestra shows in New York, Chicago, Los Angeles and London, ending in March 2020. One of the orchestra events, held at the historic Barbican Hall in London, performed to a rapt sold-out audience of 2,000, was once again immortalised as a live album “Beyond the Past” as part of this celebration which charted at #2 on Billboard’s Classical Crossover Albums in the US.

Now MONO enters into the third decade. As the first creation of this decade, the new 11th album “Pilgrimage of the Soul” is scheduled for September 2021 release, which was recorded and mixed — cautiously, anxiously, yet optimistically — during the height of the COVID-19 pandemic in the summer of 2020 with one of the band’s longtime partners, Steve Albini.

In 2006, David Moore started Bing & Ruth as a way to bring his compositions to an audience beyond academia. A pianist from Kansas, studying at the New School for Jazz and Contemporary Music in New York’s Greenwich Village, Moore was writing the sort of music he wanted to hear: minimalist ensemble music with a certain filmic sensitivity, one that prioritized grace and texture over the style’s once-radical subtraction. Following the seasoned history of minimalist heroes at the New School like John Cage and Steve Reich—both of whom taught at the institution throughout the 1950s and ‘60s—Moore’s compositions looked past the studied repetition of the style’s most prominent forerunners towards a form built on feeling, a mobilization of time-honored shapes, now angled outward towards a greater totalizing sublime. The piece’s mark the culmination of Moore’s piano studies, pairing tender lines that emphasize the instrument’s more percussive qualities with running woodwinds, warbling tape delays, and splattered upright bass lines that stare out with a wide-eyed transcendence.

After a short hiatus, spent focused on other projects, Moore returned to Bing & Ruth in 2010 with City Lake. The ensemble had grown to eleven members, making touring and rehearsals increasingly difficult to coordinate, especially given the current landscape of classical music, which can make finding patronage outside of a few prodigious, metropolitan institutions a task that often seems insurmountable. Instead he sold self-released vinyl from his basement and at their shows around New York. As Moore continued, despite constant setbacks and frustrations, in his early sketches of new material, it seemed that the project would soon fade into obscurity. Around this time, Moore was put in touch with the experimental label RVNG INTL. and the pair worked together on two full-length LPs over the coming years.

Of these albums, 2014’s Tomorrow Was the Golden Age parsed the group’s eleven members to a seven-person ensemble that distilled minimalism’s most emotive moments down to artful melodies with a heavy, heartbreaking affect. The album brought the band a newfound acclaim as it made waves around the underground community, reviving interest in the meditative pop traditions of Philip Glass and Harold Budd, stretching so-called “classical” music to new limits, and proving that there was in fact a committed audience for this sort of thoughtful contemporary composition. The album was even named “one of the finest leftfield releases of the year” by Pitchfork and earned similar praise from The Quietus and Resident Advisor.

Now almost two years later, No Home of the Mind finds Moore returning to the piano a heavier, more driven feeling. Composed on seventeen pianos across North America and Europe over numerous sessions, tours, and travel, the pieces channel the idiosyncrasies and respective limitations of each instrument into inspiration. “For me I feel like different pianos all have their own personalities,” Moore says, “So in writing these new songs, I tried to embrace the personalities of the pianos I was spending time with.” These self-contained piano lines soon grew into accompaniment and independent parts as the pieces were arranged for tight five-person ensemble pieces. Recorded in just two days at a repurposed church in Hudson, NY, in the fewest takes possible, an attempt to capture the immediacy of classic session-style musicianship, where one-take recordings were a standard to keep costs down. “We had everything rehearsed, worked out and ready to go before we ever stepped in front of a microphone so when we did, it was like instinct coming back into play,” he noted. After over a year of heartfelt composition, No Home of the Mind finds a newfound confidence, a refinement of color and cadence that pulls together a year’s worth of studied feeling into an album that looks outward with fresh-faced, affective new forms.