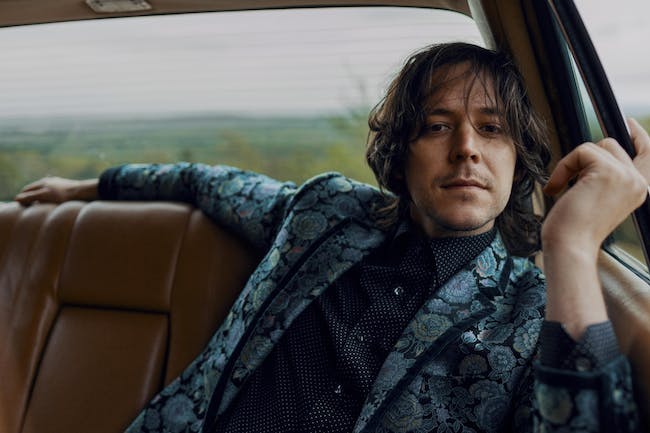 Sam Evian knew he wanted to leave New York City almost as soon as he arrived, more than a decade ago. An upstart songwriter and producer, he, of course, loved its creative wellspring—the ideas, the instrumentalists, the energy. But he’d grown up in the woods of upstate New York and, later, along the coast on the rather empty eastern end of North Carolina. The city was expensive, anxious, and unsettling, however inspiring it could be.

So in the Summer of 2017, he and his band decamped to a rented house upstate to cut his second album, the magnetic You, Forever. He then realized he could no longer resist the urge; two years ago, Sam and his partner, Hannah Cohen, split from the city, building their refuge in the quiet of a Catskills town. That reflective, relaxing environment inexorably shaped Time to Melt, his third LP and debut for Fat Possum. A glowing set of soulfully psychedelic pop gems, Time to Melt is a testimonial to the life and wisdom to be found when you give yourself the mercy of space.

During the last decade, Sam has become a preeminent collaborator, producing and engineering records for the likes of Big Thief, Cass McCombs, and Widowspeak as Sam Owens, his given name. In their new home, he and Hannah hosted bands like house guests as he helmed their sessions. The coronavirus, though, clamped down on those interactions, largely sealing the couple from their longtime scene.

So Sam tried something new: He sorted through more than 60 instrumental demos he’d recorded in the last two years and began shaping the most enticing of them into songs with help from Hannah and a cadre of long-distance friends—Spencer Tweedy, Chris Bear, Jon Natchez, even strangers who sent him voice memos via Instagram. He took the unexpected time at home to dig deeper into his world of sounds and ideas than ever before, calmly considering our moment of prevailing chaos through a lens of newfound distance.

But the last few years have been purely happy for mostly no one, Sam included. Time to Melt reckons with the weight of our time, even when it sounds largely weightless. Inspired by John Coltrane’s mixture of grace and gravitas and Marvin Gaye’s uncanny ability to turn social issues into personal anthems, Sam strove to give these otherwise-beguiling instrumentals the thoughtfulness and depth these days demand.

With its rubbery bassline and sweeping strings, “Freezee Pops” unfurls like a Summer breeze. It reads, though, like poetic testimony on police brutality, an innocent kid’s life plundered for prison-system profits. And “Knock Knock” taps Sam’s memories of race-and-class violence in the small-town South and his subsequent reckoning with our crumbling American façade, where “we tell ourselves almost anything but the truth.” The song is ultimately a tribute to the perseverance of the vulnerable, who find community and joy in spite of the way centuries of miscreants try to deny it.

There are also songs of utter celebration on Time to Melt, paeans to whatever joy it is we find in life or love. Buttressed by bold baritone sax, lifted by exuberant trumpet, and washed in fluorescent guitars, “Easy to Love” is an exultant ode to finding a new paradise outside of the city, an idyllic setting where you can plant love and literally watch it bloom. “Lonely Days” blows in with a muted brooding, but it’s a feint for Sam’s sweet hymn to a blissful partnership of shared solitude, a true blessing for a year when so many have been alone. “Lonely days are gone,” he repeats, his rhythm shifting just enough in the middle of the sentence to tease dejection and surprise with delight. Sam is so content in the Catskills that the lovely but warped “Sunshine” finds him imagining how heartache must feel, as though it were only ever a hypothetical muse. He sublimates a sense of seasick sadness into a compulsively funky oddity.

At home now near the Ashokan Reservoir with their new rescue dog, Jan, Sam and Hannah mostly listen to music while they cook dinner. That’s the kind of record Sam wanted to make—an album of sounds so pleasant and compelling that you put it on and follow the slipstream. He succeeded; Time to Melt is a waking dream, its intoxicating rhythms and timbral webs as settling, even seductive as an evening glass of wine. But making dinner, or whatever your ritual at day’s end may be, isn’t some idle exercise. It’s a place to unpack the pain and wonder, the suffering and promise of the moment, to reflect on where you have been and what might come next. In 40 striking minutes, or the time it may take you to make that meal, Time to Melt sorts through a year of a life spent in rage and hope, lockdown and love.

Liam Kazar makes joyful rock songs so irresistible they feel timeless. Just ask Jeff Tweedy. “I love everything about Liam. His voice, his songs, the way he plays instruments, his smile, his cooking... Everything,” says Tweedy. ”Whenever I hear one of his songs for the first time I almost immediately start thinking to myself, ‘oh yeah! This song! I love this song.’ It’s a magic trick very few people can pull off: making something brand new sound like a cherished memory.” But on Kazar’s debut album Due North, out August 6 via Mare Records, the LP’s 10 tracks are full of so much charm, wit, and heart it can’t be a sleight of hand.

The Kansas City-based, Chicago-raised musician and acclaimed chef/founder of the Armenian pop-up restaurant Isfahan, describes the making of Due North as a personal revelation, where the more he wrote the more his songs showed what kind of artist he’s always wanted to be. While he’s consistently been a dream bandmate over the past several years, performing with artists like Tweedy, Steve Gunn, Daniel Johnston, and more, making his own songs presented a chance to finally find his own voice. But figuring out how to step out was a rewarding challenge. “This record kind of all stemmed from a conversation I had with Jeff,” says Kazar. “I showed him some of my earliest songs I was working on and he told me, ‘It sounds like you're writing for the people in your bands, you're not writing for yourself.’ He was completely right. I was not writing songs for myself.” With that needed insight, Kazar decided to start from scratch and write songs that felt like himself.

Single “Shoes Too Tight” was a clarifying moment for Kazar in this journey. Originally a slower acoustic ballad, Kazar slowly tinkered with a synth sound and happened upon the song’s bouncy chord progression. “That was probably the closest to an aha moment that I had of ‘Oh, this is me and this is what I'm into,’” says Kazar. The finished product is an undeniable jam with a swaggering exuberance that channels Richard Swift and David Bryne. Soon after, Kazar switched gears for the yearning and delicate “On a Spanish Dune” which showcased his emotional resonance as a writer. With lush synths and wistful acoustic guitars, he sings, “Everybody's asking me / What you gonna do, gonna be / I couldn't tell you if I tried / I'm just a poem with an open line.” Though completely different songs, Kazar used these two earliest offerings as guides for what would come next. “ Those two songs were my North Star that I was following for this album,” says Kazar. “This is what it sounds like when I write for me.”

“There were two words I had in my head during the making of this record, which was joyful and vulnerable,” says Kazar, citing Al Green’s 1978 The Belle Album as an LP that encapsulates such a feeling. “I was trying to talk about things that I'm scared about but acknowledging that I'm not that powerful and you can still be joyful in the face of your own insecurities.” Take album highlight “Frank Bacon,” where Kazar sings, “When you’re running uphill and swimming upstream / Nothing’s ever gonna be the way it seems.” Despite any lyrical uncertainty the track is bursting with life, especially in the monster groove from drummer Spencer Tweedy and bassist Lane Beckstrom. Elsewhere on “Nothing To You,” Kazar finds the sweet spot between indie rock jangle and subtle country twang as he sings, “I hope you don’t resent / The love between your hands.”

Along with Tweedy and Beckstrom, Kazar enlists keyboardist Dave Curtin (Woongi), co-producer James Elkington on pedal steel, as well as Ohmme and Andrew Sa on backing vocals. Opener “So Long Tomorrow” showcases the band’s chemistry, a winding jam full of playful and soulful instrumental flourishes. One of the last songs written for the album, it was recorded remotely in quarantine but despite the distance the band’s tight bond is obvious. “These songs totally blew me away the first time I heard them: they sound like David Bowie meets the Band,” says Mare Records co-founder Kevin Morby. Due North was mixed by Sam Evian at his Flying Cloud Recordings Studio in upstate New York. “Sam knew exactly what I'm trying to do with this record,” says Kazar. “He put the whole track listing together and really had a vision for the record that I needed at that time.”

Like most musicians, the pandemic threw Kazar for a loop, knocking out both his touring revenue and his part-time gigs as a bartender. With more than enough time in his Kansas City home, he decided to pursue his longtime love of cooking by creating the restaurant, Isfahan. With recipes that honor his Armenian heritage and his family’s journey to the United States from Iran, Syria, and Lebanon, Kazar’s cooking has received press from Time Out Chicago and Eater. “In COVID, my mantra was to not have my heart broken about the future and be present,” says Kazar, explaining that ethos is one of the reasons why he named the LP Due North.

Though Due North is full of songs that act as a mirror to Kazar’s many talents, few sum it up as concisely as “No Time For Eternity.” On the track, he and Chicago country crooner Andrew Sa sing over wailing pedal steel, taking stock of the most important things in life: “Making time to live my life / Making time for you and me.” “The reality of my life is that when I come home, and I'm talking with my partner, maybe we had a bad day, but we still are laughing and having a good time with each other at the same time,” says Kazar. “I had to make music that expressed that part of me that’s a person who genuinely enjoys themselves.”