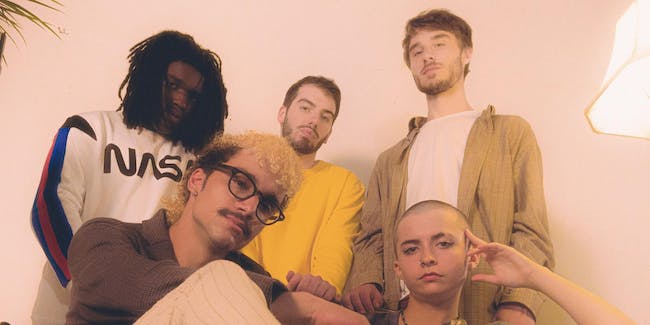 Similar Kind is an indie pop band from Norwalk, CT. It originated as just a few friends jamming in a garage and has blossomed into a five piece band playing shows all over the northeast. Similar Kind has played with acts such as Sunflower Bean, Bad Bad Hats, Charly Bliss, & more. The band is currently working on a follow up EP to their debut "Faces & Places" a project chock-full of indie pop, reminiscent of The Cure and Talking Heads, described as "dance-ready synth-pop. equal parts R&B, pop, and indie rock, the EP is a highly-polished, thoroughly-confident release".

The band has released various singles throughout 2020 with "Nobody Loves You" & "Lost & Lonely" being the latest two!

5-piece indie-alt rock group, Mandala, evoke an atmosphere that is all their own in their records and live performances. Self-described as, “sad music you can dance to” they elevate their listeners with energetic tracks like “Washed Up” and “Heavy Sleeper” while simultaneously exploring such concepts as addiction, loneliness, and failed romance. Nearly five years ago founding members, Abe Azab (Guitar) and Morgan Fasanelli (Vocals), and the first iteration of the band embark on an idea that would endure challenge after challenge as well as multiple lineup changes. The pair eventually found a solid guitarist in Chris Desiderio. It was with him that Mandala produced their now coveted EP, Ruby. Before their collaboration on this project, however, the new lineup made their way around the Northeast with former drummer Jake Crosswait and former bassist Mike Plourde as a last gasp for air. Seemingly down and out after the tour, the now trio (Morgan, Chris, and Abe) invited the substitute bass player they hired, to fill in for Plourde for part of the tour, to join. The new bassist, Matt Rosano, in turn invited long time friend and drummer, Sean Connelly. This new lineup renewed the bands motivation and sense of self from their first rehearsal together. Finding their groove immediately, they took off running. Writing and recording their newest release Cash For Smiles in a year since forming. Mandala is currently gigging as much as possible and traveling as far as their cars will let them. Playing shows big and small like Northside Festival, Warped Tour, RAW Arts Fest, Oakdale Theatre, and all the clubs and DIY venues you can find. They’ve released an official music video for their song “Motel Lobby” as well as live video sessions from the rooftops of New Haven.

Kim Normal is a Connecticut indie/alternative rock band formed in 2016 by guitarist Carl Giannelli and drummer Ethan Williams. The duo grew their fan base in Connecticut by performing sets of alternative and garage rock at local venues and community events, and gained a more widespread audience by releasing videos and promoting their music online. They released two EPs in summer 2017, “Your Peril” and “Fungus,” which drew from garage and punk influences and offered catchy tunes with a fuzzy edge. In 2018, the group added bassist Conor McCarthy. Taking influence from noise pioneers like Sonic Youth and Dinosaur Jr., the trio spent 2019 playing shows and preparing their debut LP, “On Your Own Wave,” which was released in September. The album was included in the Hartford Courant’s Top 20 Connecticut Albums of 2019 year-end list, and single “I Don’t Even Mind” was named one of blogger ctverses’ Top 30 Singles of 2019 by CT Musicians. Riding this “wave” of energy, the trio released standalone single “53” in January 2020, which has quickly become their most-streamed song. Their winter of 2020 was spent refining their live act, playing stages such as New Haven, Connecticut’s famous Toad’s Place. Kim Normal is currently recording their sophomore album.