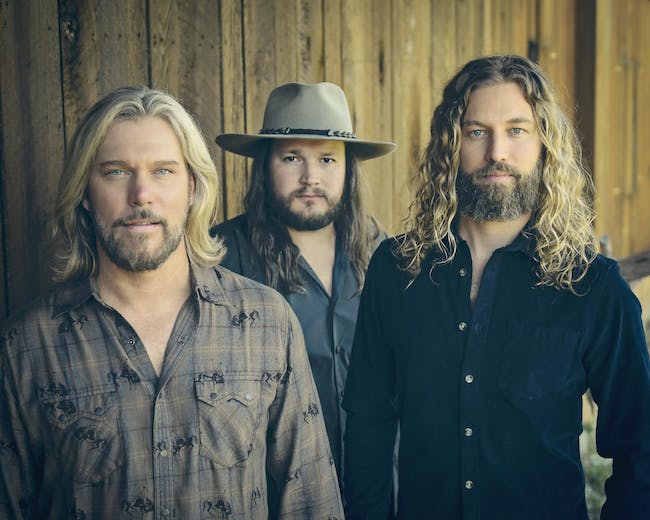 Music fans in the playlist era are much less predictable than audiences of a previous time. They have the ability to mix, match, blend and reshuffle genres, and it’s not uncommon to find listeners whose favorites include modern country, classic soul, arena rock and traditional pop – all in the same mix.

Against that backdrop, 2020 brought the arrival of Texas Hill, a gritty amalgam of overlapping tastes and distinct voices that meet in the middle as a bold harmony trio. Craig Wayne Boyd offers a voice full of gospel-tinged country smoke, Adam Wakefield blends a rootsy bluegrass-and-Americana rasp, and Casey James wraps it with a blue-eyed soul quality and deft blues guitar chops.

The result is a band that’s both rock solid and highly adaptive. Texas Hill is instantly identifiable, thanks to its well-developed signature sound: a proud, in-your-face harmonic wall. But each of the three singers can, and does, take over the lead, inevitably pushing the group in his own unique direction while those harmonies allow the whole ensemble to hang on to its sonic center.

“When you hear Fleetwood Mac together, you know it's Fleetwood Mac,” Wakefield says. “When you hear the Eagles singing, you know it's the Eagles. We have our own sound as a collective, and nothing showed that more than when we would flip parts around and still sound the same. Those three timbres together, regardless of what register they’re in, they create their own sound.”

Thus, Wakefield’s soul-tinged introduction on the gospel anthem “For The Love of It,” Boyd’s heartland tenor delivery on the barroom breakup song “Four Roses,” and James’ relaxed performance on the bluesy piece, “Up One Side” all share a commonality through those fierce, all-for-one harmonies. They reflect the very real harmony behind Texas Hill: a belief that the band’s experiences are shared, and so is the creative input.

“To this day, I've never worked with anyone in this fashion that has been so seamless,” James says. “Everyone has plenty of confidence, but also the ability to reel their ego in where needed. On stage, it's a persona, a little bravado, but we're able to reel it back when we're in rehearsals and to say, ‘Oh yeah, you’ve got a great idea.’ That's something I never got to experience.”

If the individual Texas Hill members’ names sound familiar, they should. Each of them earned a national presence as contestants on TV music competitions – Boyd and Wakefield were both members of Blake Shelton’s team during different seasons of NBC’s The Voice, and James developed a following during the Simon Cowell era of FOX’s American Idol – which worked in creating a fan base for all three.

The connection in their past experiences helped forge Texas Hill. James and Boyd, who both grew up on the outskirts of Dallas, ran into one another at a 2019 event in Nashville and dove into conversation. As a direct result, Boyd invited James’ family over to the house for dinner, where they

discovered their wives had attended middle school together in California. During the evening, James pulled a guitar off the wall and started jamming, and the music and harmonies flowed so freely that they decided to make it a regular occurrence. Roughly a month later, Boyd brought Wakefield into the musical conversation, and when the three of them met up, Boyd introduced a song he’d just written. They fell into the chorus harmonies as if they’d been singing together for years, and it became the beginning of a new musical path.

After writing and touring together for about a year, Texas Hill set in to record at Ocean Way Studios in Nashville with Anderson East’s road band, careening through a variety of textures and allowing the material to dictate who sings lead. Wakefield drives the Louisiana bayou stomper “Sugar Cane,” Boyd stakes out a vulnerable space in the richly melodic “Neon Heart,” and James approximates Delbert McClinton in the light scratch of “Love Me When I’m Leaving.”

There’s no calculation or concern about marketplace reactions involved in divvying up the parts. The three members of Texas Hill are spokes on a wheel, and the music finds its balance one song at a time through a natural friendship.

“We just get together, we jam, somebody might come in with a verse and a chorus, we'll finish writing the song or we'll even take songs that are already done that one of us may have written and redo them in a way that fits our group,” Wakefield says. “It’s not a Nashville formula.”

It is, however, a nimble exploration of teamwork and individuality. All three members of Texas Hill get their moments, but their collective harmonies are the glue; from the album opener “Heaven Down Here” with all three voices and full band rocking throughout – to the stately and reassuring closer “Darkest Sky,” a more acoustic, hopeful effort with an always-timely focus on resilience.

The message of cultural unity in the latter – “There’s somethin' ‘bout those hard times that bring us all together” – is one the group walked into 2022 embracing, and presented to Grand Ole Opry attendees in a soul-chilling, awe-inspiring acapella performance during their debut at country music’s ‘mother church’ on January 22.

Their debut album Heaven Down Here, released January 21, certainly paints that sentiment into an audible 45-minute picture that perfectly embodies the soul of Texas Hill and the passion in what they create. “With it’s real-life-inspired lyricism and multi-genre stylistic influences—which melds soul, R&B, country, southern rock, and even some Memphis blues—Heaven Down Here encapsulates the true spirit of down-home music,” mused Sounds Like Nashville. “Heaven Down Here might be a freshman project, but the talented co-writers on the record, including Keith Stegall, James LeBlanc and more, adds to the project’s rich, and slightly eclectic, sounds,” added Everything Nash.

With a blend of unique songwriting, powerful vocals and a live show that has quickly gained popularity, Jason Ingriselli & The Miles North deliver an original country sound enjoyed by a diverse fan base of all ages.

Since their collective journey began in 2018 they have shared stages with Eli Young Band & Rhett Miller (Old 97s) along with appearances at The Big E, MGM Casino, The Warner Theater, College Street Music Hall and Pratt & Whitney Stadium at Rentschler Field for UConn Football Fan Fests.

Debut album, “The Miles North” is out now, and is the culmination of studio sessions in Avon, CT working with Producer Dave Swanson and Nashville, TN with Grammy winner Randy Kohrs (Dierks Bentley/Jim Lauderdale).

Also available are the new singles “Songbird”, “Boston” and “Destination” which made its debut on National Country Radio shortly after being released in 2020. “Destination” was recorded in Connecticut at Legend Studios and Mastered by Pete Lyman (Chris Stapleton) in Nashville, TN at Infrasonic Sound.

Born in New Hartford Connecticut, Cody Bondra grew up surrounded by country, Rock and R&B music. His earliest concerts experiences consisted of Charlie Daniels, Poison, Motley Crue and other electric live acts. But it would be years before he took the stage himself.

Cody first picked up the guitar at 21 and wrote his first songs not too far after. He released his first EP “Nothin’ Wrong” (2018) while playing in local cover bands and tribute acts. Cody released 2 more singles in 2019. The poppy upbeat (“In Luck”) and the reflective heart worn ballad (“Worth Your Time”). Both received airplay on Sirius XM radio and FM radio leading to the 2019 (“Long Roads & Short Stories Tour”) The tour saw Cody playing small halls, outdoor venues, festivals and rooms along the East Coast as a solo act and with his band “The Contraband” as well as opening for bands such as LANCO, Colt Ford and Co Headlining a fall festival with The Spin Doctors.