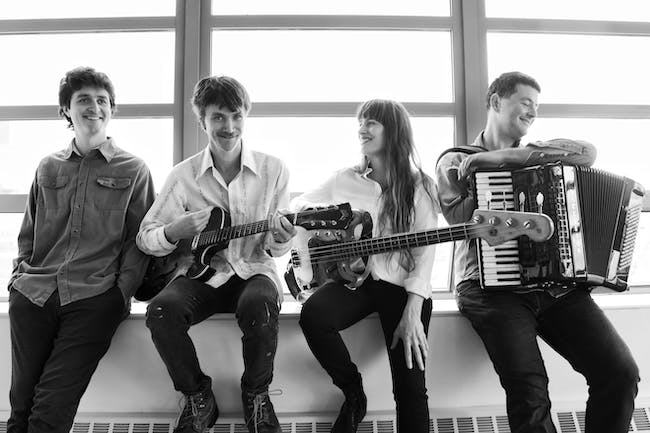 Ruminating on the risks of taking things for granted in our daily lives, Ian Felice, the lead singer/songwriter of The Felice Brothers, expresses how meaningful the experience of playing music with his band has been after long months of social distancing. In From Dreams to Dust, their eighth and most recent studio album, out September 17th on Yep Roc Records, the band’s exuberance to be together doing what they do so well is palpable. Characteristic of The Felice Brothers, the new tracks are a mixture of somber tunes with ones that are musically upbeat, all the while carrying messages that beg listeners to think deeply about the environment, humanity, legacy, and death. Many of the songs depict the passage of time, nostalgia, transience and getting older. For songwriter Ian Felice, there must also always be a current of hope in the music.

“I want for my music to do what the best music in my life has done for me,” explains Ian. “I want to do that for other people—to help them think through hard times or think through how to communicate something they didn’t know how to; to just make them happy. This may sound ironic, because my music is kind of dark sometimes, but the music I love best is just the most hopeful music like Pete Seeger singing about humanity getting along or Michael Hurley music that connects to some childlike simplicity that makes you feel light and happy. Music is a medicine. It can make our time on the planet a little more enjoyable.”

The Felice Brothers, Ian (guitar and lead vocals) and James (multi-instrumentalist and vocals), hail from the Catskills, NY, where their early songs echoed off subway walls and kept company with travelers and vagrants. Their current lineup, with the addition of bassist and inaugural female Felice member Jesske Hume (Conor Oberst, Jade Bird) and drummer Will Lawrence (also a singer/songwriter) as their rhythm section, promises to be the best yet.

Nathaniel Walcott (trumpet) and Mike Mogis (pedal steel player) act as an accompaniment throughout the tracks, the latter of whom mixed From Dreams to Dust, which was produced by The Felice Brothers.

A folk-Americana-rock-country band with deep roots in varied genres, The Felice Brothers are what Rolling Stone lauds as “musician’s musicians” and poets. Indeed, Ian has proven his pedigree as a poet with the publication of his limited-edition collection of poetry Hotel Swampland (2017).

They are known by fans for their catchy tunes like “Frankie’s Gun,” “Love Me Tenderly,” “Cherry Licorice,” and “Lion” and, more recently, 2019’s “Undress” and “Special Announcement,” but they offer much more than a great sound. Seamlessly interweaving bizarre catalogues of literary and pop-culture references with vivid portrayals of life and its kaleidoscope of tragedies and hopes, their lyrics and dazzling musical accompaniment not only sound good but demand introspection. Some of the themes that run through their music, as Ian states, “are perennial” and are centered around “searching for something or transformation.” Others explore “characters trying to achieve some ideal they’re striving for” or who are “being weighed down by reality.”

Their latest in this tradition is their opening song, “Jazz on the Autobahn,” a piece marked by its explosive sounds that invite us to join in the merriment of the maypole in the midst of uncertain futures. The song displays Ian’s talent for switching from his smooth narrative voice to singing in his vintage, rich tone. Jesske’s adept bass strumming, accompanied by Will’s rhythmic drumming, act as a pulse, pleasantly complemented by James’s melody on the piano. Together, along with the wailing trumpet, The Felice Brothers are mesmerizing. The band’s cohesiveness in this opener and the brilliant synthesis and harmonizing of voices and instruments reflects the members’ varied talents as well as their unified vision.

Detailing the story of Helen and The Sheriff who are driving together in a “doomed Corvette,” “Jazz on the Autobahn,” Ian explains, is about a couple of people who have “left behind their entire lives in search of something but are haunted by a feeling of looming catastrophe, and the two souls are adrift in uncertain times, trying to understand their own feelings, hopes, and desires.”

As he has throughout his career with The Felice Brothers, Ian harnesses the dissonance of life to produce music that is at once musically inspiring and conceptually sophisticated. He works through the difficult realities of life as a way to, at least temporarily, end at a more life-affirming state.

“I just have strange emotions and things I don’t understand. Sometimes when I write, it helps me work through the ways I feel,” Ian explains. “I want it to be about art.” These two mutually informing needs, that of wrestling with the emotional and psychiatric impacts of living in a world saturated with tornadoes, mushroom clouds, chemical rain, poisoned bird baths, worsening markets, greed, earthquakes, and war, and creating artistic productions that offer us what Ian calls “digestive realities,” define two notable aesthetic principles that characterize Ian’s songs and all of the tracks on From Dreams to Dust.

Ian wants his songs to do for others what his favorite songs do for him, which is to help listeners get through hard times. “The greatest thing,” he states, “would be for people to be inspired by our music in a positive way.” But for Ian, doing so involves not turning away from adversities but rather requires facing harsh truths for the purpose of nourishing us with these digestive realities that might help us work productively through otherwise demoralizing and debilitating prospects. Thus, as the speaker of “To-Do List” writes a plan, or perhaps a bucket list, as “the plague goes by,” the speaker resolves to “Befriend an Unfortunate lunatic” and “Bring Flowers to the Sick” as well as absorb the light from the “amorous rays” of the sun.

The songs in From Dreams to Dust ask us to pay close attention to Ian’s narrative techniques and literary devices, transforming his songs into poetry and short stories. “Ian is so good about taking poetry, novels, folk art, and a huge wealth of artistic knowledge and metabolizing those things into music that is never academic or stilted but feels so alive,” explains James on his brother’s literary prowess.

Indeed, in “Valium,” Ian transforms the mundane life of the speaker, whose “touch and go” happiness is as fleeting and insubstantial as the channel surfing he does in a “motel on the border of Utah and Colorado,” into a commentary on “the national consciousness.” Ian conveys what he refers to as “the tragic idealization of the American west” that the US public uncritically consumes through John Wayne and Annie Oakley clips, and which elide the violence of colonial legacies. With a little help from the rest of the band’s incantations and the mournful sound of the pedal steel guitar, a feature that permeates the album and gives it a beautifully haunting quality that leaves one wanting to join in with howls, the song ultimately revives the souls of those former inhabitants of Colorado and Utah in the midst of the speaker’s preoccupation with his own “warmly beating heart.”

James too shines on From Dreams to Dust with “All the Way Down,” a song that focuses on artificial intelligence and, as he puts it, the transformation “from dust (or starlight) into something that can dream” and “Silverfish,” a piece that lists the external forces encroaching upon the speaker’s physical and social space, displacing him and unraveling his life as he helplessly repeats “I gotta to do something.”

While the band has recorded previous albums in studios, they also have a tradition of leaving the comforts (and restrictions) of the studio to record their music in unconventional spaces. Their first album was recorded in a leaking old theater in New York. This was the place where James learned to record. “It was awesome,” says James, adding that the band recorded the self-titled album The Felice Brothers in an old chicken coop. If we take James’ words from “Blow Him Apart,” James also “learned to sing / In a chicken coop,” a fact that speaks to The Felice Brothers’ embrace of their working-class roots and their commitment to remain raw, to merge the sacred simplicity of their recording process with the sophistication of their lyrics and musical sound. As Rolling Stone notes, “the band has, from its inception, prioritized self-definition” and, I would add, creative freedom.

“I’d rather be in a space where there is no time limit and if you break anything, it’s no big deal,” says James, whose tenure with The Felice Brothers has included many raucous performances. In the earlier years, until such an approach led to much broken equipment, The Felice Brothers invited audiences to join them onstage, and they have been known to have fans break out into impromptu performances in their live shows. These different manifestations of The Felice Brothers say as much about their humility as artists as it does their artistic principles.

“I want to continue recording in strange places that feel like home, that feel like ourselves,” continues James. The Felice Brothers have found their new recording home in an 1873 church that Ian renovated. Though the church had fallen into disrepair, Ian admits it was always his dream to use it. Feeling lucky to have acquired the property, Ian spent a few months renovating the approximately 30×40, one-room church. He put in new flooring, and The Felice Brothers would go on to record From Dreams to Dust in this new, old, and now hallowed, place. Considering the band’s history in unconventional spaces and the pandemic they have weathered apart, the renovated church represents Ian’s, and The Felice Brothers’, enduring commitment to friendship and music and to finding beauty, and hope, in unexpected places.

The restored church, like From Dreams to Dust, also reflects the Felice Brother’s unrelenting efforts to continue rebuilding in the wake of life’s decomposing cycles. Though perennially conscious of life’s treachery and our troubling ecologies, which we seem, as James remarks, “so ill-fitted to interact with,” The Felice Brothers constantly remind us that life’s mysteries are still worth pondering and, in so doing, offer us the blueprint for helping rebuild our lives after they collapse. As James sings in “All the Way Down,” whether we are “the union / Of an ape in an Apron/And a break in the clouds” or “nothing but starlight / All the way down,” we are alive and inhabiting this strange space together. Ian’s poetic final song, “We Shall Live Again,” assures us that even “in this life where any joyful thing / is paid two fold in suffering / we shall live again.” The phrase Dreams to Dust, then, may represent the deterioration of some hopes such as in the case of the two characters in “Inferno” who are consumed by the fires in a “fevered dream” and decaying lives as “some die on the steppes of frozen wasteland” while yet others “OD on the roads to Graceland” in “We Shall Live Again,” but, Dreams to Dust also offers us the sacred ashes with which we might enrich the earth by scattering. That is, the Felice Brothers bequeath us the matter with which we might cultivate life and teach us the words, like chants, that offer the power to heal.