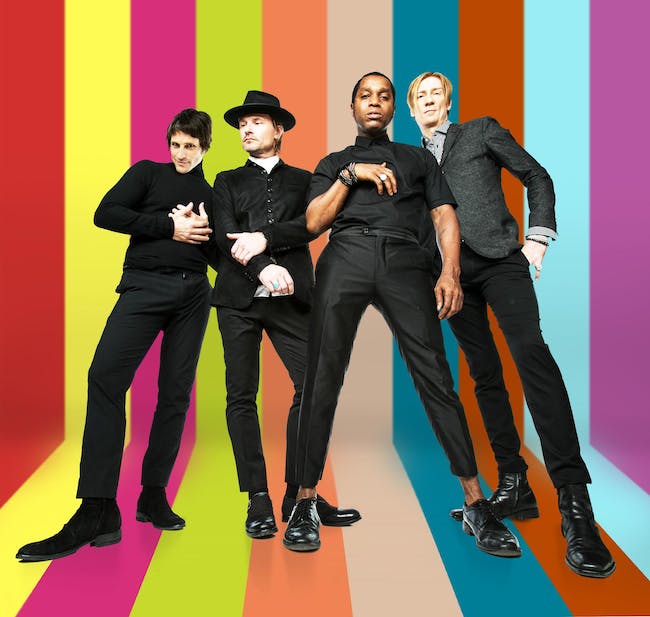 Greatness begets greatness. The more time you spend around perfection, the more it rubs off on you...

Since forming in 2010, Vintage Trouble have quietly become rock ‘n’ roll’s best kept secret anointed by its very gods on international tours in every corner of the globe. Distilling swaggering rock, soulful blues, R&B (rhythm& blues) grooves, and pop ambition into a bold and brash brew, the quartet—Ty Taylor [vocals], Nalle Colt [guitar], Rick Barrio Dill [bass], and Richard Danielson [drums]—have logged 3,000 shows across 30 countries on tour with divinities such as The Who, The Rolling Stones, AC/DC, Lenny Kravitz, and Bon Jovi, to name a few. Along the way, they also performed on Later... with Jools Holland, Jimmy Kimmel LIVE!, Conan, The View, and The Tonight Show (four times in one year!) in addition to receiving acclaim from New York Times, NPR, The Wall Street Journal, Billboard, Rolling Stone, and more. With a trio of albums under their collective belt, namely The Bomb Shelter Sessions, The Swing House Acoustic Sessions, and 1 Hopeful Rd., they challenged themselves like never before on the 2018 EP, Chapter II.

Inspired by this sterling reputation on the road, Vintage Trouble aimed to seamlessly translate that stage spirit into the studio setting for the first time.

“We’ve gotten the opportunity to play literally the biggest shows in the world,” says Ty. “However, we weren’t catching the same feeling on record as we did live. That sent us back to the factory, you could say. We started to listen to a lot of popular music—everything from Amy Winehouse and Adele to Bruno Mars and Lauryn Hill. We wanted to take something from the past and put it in contemporary framing. That was the impetus. We decided to play what felt like pop songs would be with rhythm & blues and rock ‘n’ roll tension. There’s a different life to the music. That was the entire mission behind this new phase.”

“We jumped into it without any fear,” adds Nalle. “We wanted to show the other side of who we are. It’s definitely Chapter II in the story of Vintage Trouble.”

In order to bring that vision to life, the guys traded Southern California for the Cayman Islands. Throughout two ten-day trips to a private studio, they recorded a bevy of songs and culled them down to what would become Chapter II alongside producer Jeeve [Bruno Mars, Carlos Santana]. Instead of recording live a la previous releases, the musicians tracked individually for the first time and incorporated keys

and horns into an expanding soundscape.

“We used to record everything live, but it was difficult to edit and you’re stuck with the full take, mistakes, a lot of bleed, and all,” says Richard. “We decided to make music with today’s recording techniques for the new EP. Instead of just being a live band in the studio, we got to be a studio recording artist. We didn’t paint ourselves into any corners. It’s a major evolution for us with a bigger sound that can speak to a much larger audience.”

The first single “Can’t Stop Rollin” most definitely does. Hinging on an unshakable beat, it steamrolls forward on disco-style shuffle and sinewy guitar before culminating on a slick and show-stopping refrain. Think The Police covering Off The Wall...

“I was listening to The Weeknd’s Beauty Behind the Madness a lot,” recalls Ty. “That was a massive influence. As far as the lyrical message is concerned, we can all relate to the feeling of being with someone you want to get it on with, but there’s something separating you from having that happen. The only thing separating you is the little bit of fear you both have of how good it might be. So, the song says, ‘Try as I may but there’s no controlling. You got me rollin’. I can’t stop rollin’.”

Meanwhile, the funky strut of “The Battle’s End” encases a message of social justice underneath a simmering groove and echoing (Ty’s trombone). Lyrically, it speaks the frontman’s emphasis on social responsibility.

“It’s our responsibility (as artists) to write messages that are going to make people think about how we can change the fabric of the world right now,” he goes on. “Instead of demanding it from others, demand it from ourselves first. Bob Marley and Lauryn Hill invited others to be better people. When I saw Spike Lee’s BlacKkKlansman, it really voiced my thoughts to writing that song. We keep repeating history instead of owning the responsibility of making the changes once and for all.”

Illuminating the airtight songwriting at the EP’s core, Vintage Trouble included acoustic takes on all five new cuts. “That was important,” adds Ty. “They’re real (traditional songs) that can be played on acoustic guitars, percussion or piano.”

In the end, Chapter II represents the beginning of what might be Vintage Trouble’s greatest chapter yet.

“We’ve been known as a live band for so long, and we’ll always have that,” Rick leaves off. “We really took our time to make sure the song always comes first in the new music. We’re taking that part of our art seriously and gut-wrenchingly making sure we don’t leave anything on the table. This music had to be able to hang with the greatest records we love in our record collections. That was the goal.”

Hollis Brown’s latest single “Run Right To You” was released on 7” vinyl in October 2016 on Velvet Elk/One Little Indian records. Their song “Steady Ground” is a featured exclusive on Amazon’s playlist Amazon Acoustics. The band’s vinyl EP, Cluster of Pearls (Alive Naturalsound Records), was chosen as one of the 300 select releases throughout the world for Record Store Day 2016. Pressed on Starburst Vinyl, the record is limited to 800 copies and features four previously unreleased tracks and two songs released on vinyl for the first time. It was released digitally on iTunes in August 2016. Cluster of Pearls follows up the 2015 release of Hollis Brown’s third album 3 Shots (Jullian Records/RED), featuring the Bo Diddley collaboration “Rain Dance,” and the duet “Highway 1” with acclaimed alt-country songstress Nikki Lane.

The independent act has achieved a significant amount of success since their formation in 2009. They released their debut album Ride On The Train on Alive Naturalsound in 2013 (produced by Adam Landry), garnering song and video premieres from Rolling Stone, Paste, and American Songwriter, along with music placements in the worldwide trailer for the Michael Keaton film “The Founder,” the Willem Dafoe/Matt Dillon film “Bad Country,” Direct TV’s “Kingdom”; Showtime’s “Shameless,” MTV’s “Real World,” and an online ad campaign for Abercrombie & Fitch.

Following a Lou Reed tribute concert in NYC, Alive Naturalsound asked the band to record a tribute to the Velvet Underground’s classic album Loaded, as a limited-edition vinyl release for Record Store Day 2014. Hollis Brown Gets Loaded took on a life of its own, with airplay on influential radio stations, resulting in a full CD & digital release.

The band has toured extensively in America and Europe, headlining and supporting such bands as The Counting Crows, Citizen Cope, The Zombies, Jackie Greene, Heartless Bastards, Rich Robinson of Black Crowes, and Jesse Malin, and building an impressive fan base on both continents.