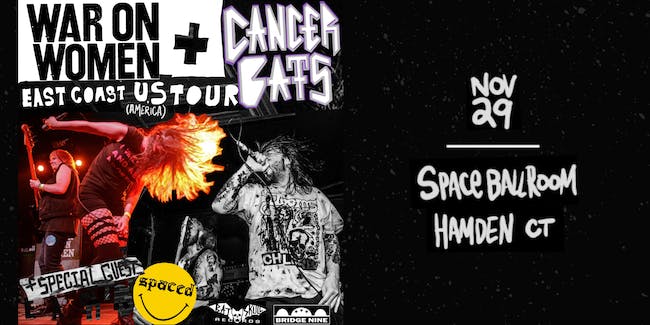 With 17 years under their belt including 6 acclaimed studio albums, five Juno Award nominations, and countless tours around the globe, Canadian hardcore punk heavyweights, Cancer Bats are a well-known force within the world of heavy music. On their seventh studio album, PSYCHIC JAILBREAK (out April 15 via their own label Bat Skull Records in partnership with New Damage Records), the beloved metal stalwarts found themselves once again stepping into new territory as a band, writing and recording as a three-piece following the departure of founding member and guitarist Scott Middleton, while navigating a global pandemic.

“On October 26th 2021 we started making a record,” shares lead vocalist Liam Cormier. “This was the 7th studio album for Cancer Bats but it was the first time the 3 of us, Jaye Schwarzer, Mike Peters and myself Liam Cormier, were going to record an album, we had written just the three of us. Jaye covering both guitar and bass duties, all three of us learning how to use digital means to record and arrange ideas from our separate provinces.”

Cormier continues, “We knew this album had to be special. Our band has never been one sole member tasked with all the writing. Over the last 15 years of releasing albums, it’s been a collaboration of the 4 of us forming all musical ideas. That being said, we knew that the 3 remaining Bats, would have to prove our worth with this next album. We wanted to show Cancer Bats fans that an exciting new future was in store for us. To say the stakes were high on this album, would be an understatement. We were all feeling a mix of excitement and nerves as we began tracking the 11 songs that would form this record.”

Once again enlisting the watchful eyes and ears of producer JP Peters (Propagandhi) at his studio Private Ear in Winnipeg, MB, Cancer Bats were looking to step up their game on their latest record and were eager to push beyond what they had achieved on their last studio album, 2018’s critically-acclaimed, commercially successful and Juno nominated album The Spark That Moves.

“The Spark That Moves saw the band playing bigger shows and festival slots than we had done in years,” shares Cormier. “With packed shows across Canada, The UK, Europe and Australia, the bar had been raised for Cancer Bats and we were eager to surpass that, with this new set of songs.”

Over the next three weeks, Cormier, Schwarzer and Peters saw their rough ideas exchanged in emails evolve from Garage Band home demos into thundering Cancer Bats songs. One after another, boxes were being ticked, Mike’s signature power house of drums laid the foundation, as track after track of Jaye’s guitars were layered on top of another, all while they referenced their favourite Entombed, Metallica and White Zombie guitar tones. All of this fuelling Cormier’s vocal fire, inspiring him to fully push what he had to offer both in lyrics and screams.

“Thematically there was no shortage of inspiration for this album, with so much happening over the last two years, it would be hard to not have that effect my writing,” says Cormier. “With songs like “Radiate" dealing with our impact on the physical world, to "Friday Night" drawing inspiration from activism and demonstrations happening all over, to more personal songs like “Crocodiles" about losing touch with people as we grow older and changing our perspectives, or a song like title track "Psychic Jailbreak" where it’s about completely shifting our concepts of Time and Space as we know them.”

As vocal melodies began taking shape and adding different dynamics into the mix like Brooklyn Doran singing a duet style on “Hammering On”, or Jaye’s distinct snarls filling out many a chorus, the whole album was starting to register as one of the best projects the band has ever worked on.

“On the final days, while adding the last bits of “skateboard noises” and guitar shreds, we were all feeling our confidence levels rise with each play back. This last years’ worth of long hours and many late nights writing, finally coming together as a whole and fully formed effort. We were proud as a band and felt this new offering was worthy to join in the legacy of Cancer Bats albums.”

Being known first and foremost as a live band, Cancer Bats have been asked countless times who will fill the position of Scott Middleton on guitar. Long-time friend, Wade McNeil (Alexisonfire, Dooms Children, Gallows) helped fill the void, shredding alongside Cancer Bats in 2019 while Scott was at home with his new baby son. But as the band readies to hit the road once again they will be enlisting not one, but two guitar players!

“The first is our long-time friend and recent collaborator Nick Sherman, who joined us on guitar for our latest acoustic renditions of classic Bats tunes,” shares Cormier. “The second is our friend Stevis Harrison who currently plays guitar in Fever 333 and played in The Chariot when we toured together back in 2010. Having shared stages with both of them and more importantly shared countless laughs and good times, we decided it made more sense to have 2 epic players along for this new chapter of the band.”

“With 2022 already filling up with show and festival offers, this looks to be an exciting and promising year for the band that we can’t wait to tear into. SEE YOU IN THE PIT!”

War On Women is a co-ed feminist hardcore-punk band. Formed in Baltimore, MD in 2011, W.O.W. use driving riffs and in your face vocals that attack the listener both sonically and lyrically, penning catchy and confrontational songs that touch on rape culture, street harassment, the gender wage gap, transphobia, and other vitally pertinent social issues.

Riff-fueled manifestos are nothing new for War On Women. The co-ed feminist punk troupe has been tackling injustice one song at a time since their 2010 inception. Storming out the gate with teeth gnashing and spitting venom, War On Women’s self-titled 2015 debut crossbred riot grrrl ferocity with the nimble aggression of thrash. Hailed for their crystalline jabs at societal ills, War On Women prove that hardcore can incite change that ripples far beyond the parameters of the stage.

War On Women are neither a crew of young bucks nor a contagion of seasoned legends. They don’t fit neatly into metalloid machismo or hulking hardcore tropes. They have nothing to prove, and there’s nothing more delightfully dangerous than that.

Zipper is a punk band from Connecticut and Rhode Island formed in 2020.