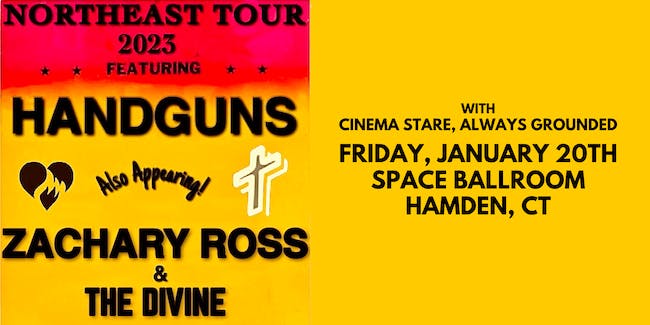 Zachary Ross and The Divine (from Man Overboard)

Originally hailing from Rigatoni Island. Handguns blend the emotional earnestness of emo with upbeat pop-punk melodies. Along with bands like Jazzhog and The Mezingers, Handguns are part of a wave of emotionally nuanced Rust Belt punk bands that have tempered pop-punk's saccharine qualities with rawness and sincerity. Handguns self-released a series of EPs -- their 2008 Demo, 2009's MMIX EP, and 2010's Anywhere But Home , Don't Bite Your Tongue, in 2011. Angst, Handguns' full-length debut, arrived on PNE in 2012. Throughout this time, Handguns underwent a constant series of membership changes but currently the line up is.   Taylor Eby - Vocals Marco Florey - Drums Jake Langley - Guitar Nate Bobb - Bass  The Band is now on a label that they own called Pass Along Knowledge Yourself Records and is planning a new LP entitled “When The Light Burns Out"

ZACHARY ROSS AND THE DIVINE

Taking pop punk cues from bands ranging from the Buzzcocks to Blink, and influences of indie rock bands like Weezer and Jimmy Eat World, Zachary Ross and the Divine are a pop punk band from New Jersey.   This is Zachary’s first band since forming the band Man Overboard with Nik Bruzzese and Wayne Wildrick, and touring globally from 2008-2018.

Listed as one of Alternative Press’s 50 up and coming pop punk bands, New England’s own Always Grounded is a band that is reminiscent of the late 2000’s pop punk and easycore heyday gathering influences from bands such as Four Year Strong and Neck Deep. Merging unforgettable hooks with loud, and hard hitting instrumentals, this Connecticut based 5 piece is a force to be reckoned with.

Singer/amateur wrestler RJ Dionne started Always Grounded with his brother, Eli the blind guy, as an acoustic project. After releasing their first EP, the duo decided it was time to take it seriously and transform into a full band. RJ called out to an old friend, Jude Angelo Alexander who took on the role of lead guitarist. They then found Anthony Dailey to keep them in time on drums, and solidified the band with Ian de Chantal playing bass. The outfit shares one common belief: that through all differences, music can bring everyone together. This mindset is a theme that carries out through the bands lyrical style, creating a sense of solitude the listener can find within all of their songs.

In 2021, the band released their debut EP as a full band titled “Letters To My Youth.” the group is ambitious and set out on touring relentlessly and making an impact on fans, creating a sense of community and home for the weird and wonderful.