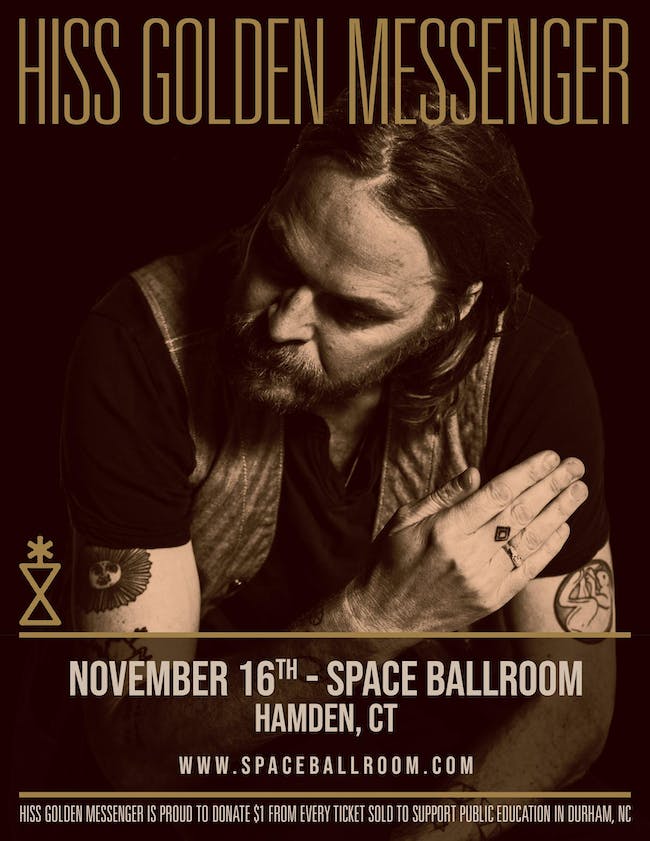 Hiss Golden Messenger of Durham, North Carolina, a vehicle for singer-songwriter M.C. Taylor, calls up a wide spectrum of American vernacular music — from Archie Brownlee to the Staple Singers, and from singer-songwriters Van Morrison to Townes Van Zandt. After relocating from California to North Carolina, Taylor began to record material under the name Hiss Golden Messenger. Though his initial recordings featured only his voice and guitar recorded to a cheap cassette recorder, recent Hiss albums have incorporated horns, strings and choirs. “(Taylor's) songs are smart and complex enough to betray a bigger and more insane question: What makes a person happy?” — The New Yorker

Hiss Golden Messenger has partnered with PLUS1 so that $1 from every ticket goes to support the Durham Public Schools Foundation (North Carolina) whose mission is to foster community support for public schools and invest in our students, educators and families to ensure success and equity for every student.

A virtuosic, award-winning guitarist with a gift for insightful songwriting, Molly Tuttle evolves her signature sound with boundary-breaking songs on her compelling debut album, When You’re Ready. Already crowned “Instrumentalist of the Year” at the 2018 Americana Music Awards on the strength of her EP, Tuttle has broken boundaries and garnered the respect of her peers, winning fans for her incredible flatpicking guitar technique and confessional songwriting. Graced with a clear, true voice and a keen melodic sense, the 26-year-old seems poised for a long and exciting career. When You’re Ready, produced by Ryan Hewitt (The Avett Brothers, The Lumineers) showcases her astonishing range and versatility and shows that she is more than simply an Americana artist.

Since moving to Nashville in 2015, the native Californian has been welcomed into folk music, bluegrass, Americana, and traditional country communities – even as When You’re Ready stretches the boundaries of those genres. Over the past year, Molly has continued to accumulate accolades, winning Folk Alliance International’s honor for Song of the Year for “You Didn’t Call My Name” and taking home her second trophy for the International Bluegrass Music Association’s Guitar Player of the Year (the first woman in the history of the IBMA to win that honor).