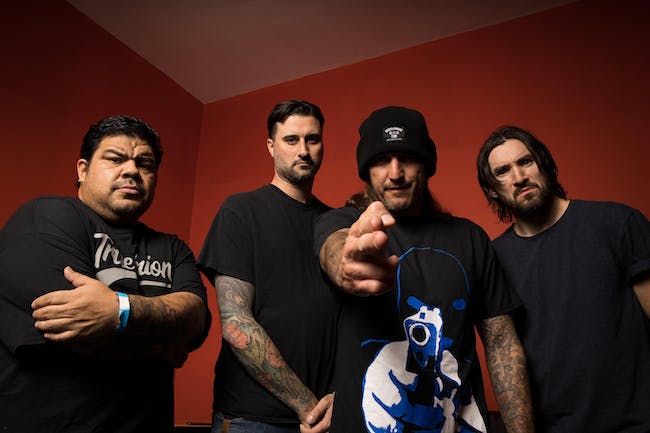 Maintaining urgency, authenticity and integrity has never been an issue for New York City’s hardest, and hardest working band, Madball. Twenty-five years along as a recording and touring entity, MB brings forth its ninth aural chapter, For the Cause; a signature collection of lionhearted, groove-laden, street-level New York Hardcore as only Madball can bring it.

The aptly titled album doesn’t so much revisit where the group has been since 1994 – although Madball released its first EP, Ball of Destruction as a virtual Agnostic Front side-project back in 1989 – but forges forward and represents where the fellas find themselves collectively and personally a quarter-decade down the road.

Throughout the band’s storied history, Madball has asserted its mission; carrying forth a simple yet righteous cause, and this time around, they’ve chosen to define that cause more succinctly than ever before. Tornadic vocalist/front man Freddy Cricien explains, “If you’re not fighting for a cause, you’re not participating in life. Simple as that. Speak up, fight, educate yourself, make a difference and make sacrifices for what’s important to you.” Words to live by.

For the Cause sees the return to the fold of guitarist Matt Henderson, who hasn’t appeared on a Madball album since 2000’s Hold it Down, for which Henderson also served as producer. “To have him record with us again was really special” offers Freddy. He adds, “Matt’s been playing ‘commemorative’ shows and tours with us on-and-off over the years, so, obviously, the love and friendship is there. He’ll always be an honorary member… A Madball lifer.”

Unique to this album is the stellar production work by Rancid’s Tim Armstrong, who clearly helped express Madball’s distinctive voice powerfully and dynamically without stepping on the trademark formula the band has forever carried, yet constantly seeks to improve upon. “It’s a tricky thing, producing. You can truly enhance something, but you could also ruin a record if a band lets you” says Cricien. Freddy continues, “Tim has always respected our band and how we do what we do. He knew we had a vision for how this album should sound, so he let us do our thing, but was there every step supporting and cheering us on. Whenever he did chime in, it was well thought out and he made strong suggestions. He even helped write the hook on ‘For You.’ He was there for us in a non-meddlesome role, which for this particular record, was the best-case scenario.” Danish studio veteran Tue Madsen (Meshuggah, Dark Tranquility, Sick of it All) skillfully handled mixing duties on For the Cause.

Also, noteworthy on For the Cause are the various cameo appearances by some of Madball’s friends, as well as several artists with whom the group shares a mutual respect; namely Psycho Realm’s Sick Jacken on the track “Rev Up,” The Business’ Steve Whale and producer Armstrong on “The Fog,” plus legendary emcee Ice-T on the hardcore banger “Evil Ways.” Freddy discloses, “Jacken is our homie. He just came through to say what’s up and check out the spot and I happened to be recording ‘Rev up.’ He was really digging the song and just freestyled. It really drove the message of the song home. As for Ice-T, he added a good flavor to ‘Evil Ways.’ It was a real honor to work with someone I’ve been following and have respected since I was a kid. He genuinely supports our band and the scene we come from. Tim and Steve jumping on The Fog’ happened organically like everything else with this record.” The UK Oi! legend provided the spoken intro and a guitar lead to the street punk tinged anthem.

What’s maybe most notable on For the Cause is its various twists and turns both musically and vocally to keep Madball’s brand of NYHC fresher than it has ever been. Freddy presents, “How do you grow as a band or as a person if you don’t take chances? We feel obligated to ourselves and everyone else to evolve, at least somewhat. We took more ‘chances’ on this record than on any previous one, and we’re happy about that! We’re proud that it’s still very much us; it’s real and honest. There is plenty on there to satisfy the people that support us from every era of this band.”

Forget what you think you know about Boston Hardcore.

Beyond the stereotype of “beatdowns”, the “tough guy” exterior, the simplistic “chugga chugga” riffage, and so much more than just a mosh pit is one of the hardest working bands in hardcore: Death Before Dishonor. The band has been with Bridge Nine longer than anyone on the roster, making September 2014 a full decade with three full-lengths (one getting an expanded reissue as well), two EPs and one split on the label.

Their latest full-length, 2009's Better Ways to Die, not only solidified Death Before Dishonor’s commitment to what they do as a band, but also displayed their unflinching ability and desire to establish themselves outside of cliche’s and the pre-defined constructs of what it is to be hardcore.”

Better Ways To Die did not come without obstacles. Member changes ensued, a new drummer was added into the fold, and the band found themselves in a spot of free agency as their contract had expired with their home since 2004: Bridge Nine Records. Vocalist Bryan Harris stated, "It was a weird position to be in since we’ve pretty much been with Bridge Nine since the beginning, but staying with the label was an easy decision for us. They’ve always cared about our band and since Count Me In came out, they've grown to become that "˜next-level' label that our band needed to move forward."

And move forward they did, as Better Ways to Die showcases Death Before Dishonor reaching outside of the safe hardcore formulas both in songs and content while still retaining their roots in the South Boston upbringing. Produced by Jim Siegel, Better Ways to Die lies somewhere between the harder punk edge of Rancid, the working class anthems of fellow Bostonians Dropkick Murphys, the hardcore attack of Hatebreed and the precision and riffage of Slayer. This is the sound of a true Boston Hardcore band.

Lyrically, Better Ways to Die is an undeniable view into the world that is Death Before Dishonor; the blue collar, overlooked, undervalued segments of society and how we all survive in the face of adversity. However, this album pushes beyond just anger and rage as songs like "Remember" and "Our Glory Days" remind us of the hope that can be found in punk and hardcore music. Further diversifying the album is "Boys in Blue", which takes the punk mentality of "fuck the police" and turns it on the wrongful arrest and abuse of Harris' brother. The title track is a unique view on war and its effects in a poorer neighborhood and is perhaps one of the best Death Before Dishonor songs to date.

Better Ways to Die is the sound of defiance when all one is surrounded with is defeat and marginalization. "If it weren't for this band, I would be sitting in Massachusetts. In the last two years I've been to Australia, Russia, Ukraine, Japan, all across Europe, the U.S. and Canada and I've seen all four oceans. We have no reason to stop now - people are now starting to pay attention," said Harris. So pay attention: Better Ways to Die is the new definition of Boston Hardcore. Just ask AllMusic, who upon release of the album remarked that with Better Ways to Die, Death Before Dishonor had "certainly blossomed into one of the top modern hardcore outfits of the modern day."

Death Before Dishonor have played over 1,000 shows with the likes of Agnostic Front, Madball, Sick of It All, Hatebreed, Have Heart and Terror, and hit every nook and cranny around the world - Europe, Australia, Japan, Great Britain, Mexico, Canada and the entire continental U.S.

Cruel Hand is coming straight out of Maine and by the end of this year you will have no choice but to acknowledge that they're earning their place at the top of the hardcore heap. Called “one of the most important young bands waving the flag of east coast hardcore” by Hardtimes.ca, this summer the band is proud to put out their second album for Bridge Nine, “Lock & Key”

Since the release of Cruel Hand's Bridge Nine debut, 'Prying Eyes,' in 2008, the band has been a relentless touring machine and one of the tightest bands in the hardcore world. Cruel Hand has shared the stage with bands like Have Heart, Bane, Terror, Death Before Dishonor, and more, and will continue to tour the globe non-stop in support of Lock & Key.

Dubbed “the best thing that this band has created thus far” by AMP Magazine, Lock & Key is Cruel Hand's third full-length. Full of just as many catchy, metallic riffs as mosh parts, Lock & Key is a nice mix of Madball, Leeway, Cro-Mags, Metallica, Suicidal, Obituary, etc., and is one of the most well-rounded hardcore albums in recent memory. Alternative Press called Lock & Key, ”…some seriously intense hardcore, mostly characterized by blistering speed and ferociously heavy breakdowns.”

Lock and Key was recorded in Wakefield, MA with producer Jay Maas (Verse, Bane, Defeater) and illustrates what Cruel Hand is capable of both lyrically and musically. Vocalist Chris Linkovich said, "Lock & Key is definitely not a 'Prying Eyes Part 2.' It's not just a progression either, we feel like this is our defining release. We weren't scared to bring all of our influences to the table, no matter what the genre of music. We spent a lot more time with guitar sounds, a lot of layering and melody and other second guitar work. As far as lyrics, I reached my goal of working with a lot of different subject matters and also using a little bit of melody with different vocal patterns and delivery. The record is ill and we listen to it every day."

CT Hardcore, Demo on Spotify and Bandcamp. New EP to drop this year.