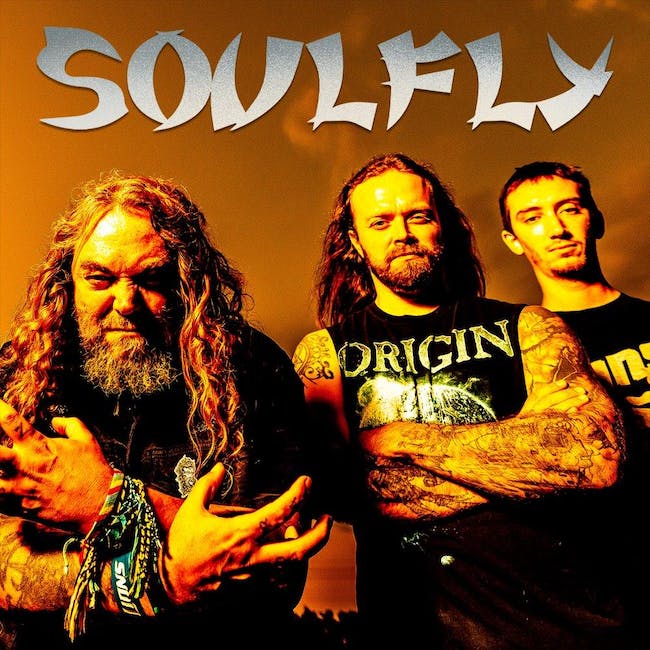 Bodybox, Skinflint, Chained to the Bottom of the Ocean, The Sons of Montana

iCal
Google
with Bodybox, Skinflint, Chained to the Bottom of the Ocean, The Sons of Montana

Underground icon, extreme metal trailblazer, third world warrior, and leader of a diverse and dedicated tribe, Max Cavalera not only survives but thrives, blasting out riff after killer riff. The same voice, body, and spirit which launched Soulfly in 1997 summons impossibly heavy noise to this day, throwing down ten slabs of monstrous music on Soulfly’s twelfth album, 2022’s Totem.

Produced by Max alongside Arthur Rizk, whom Revolver described as “the secret weapon behind Power Trip, Code Orange, and Cavalera Conspiracy,” Totem attacks without apology. It brims with the blackened-thrash and death metal bite of modern Soulfly classics like Ritual (2018) and Archangel (2015), with nods to the heavy groove of Primitive (2000) and Prophecy (2004).

“I really dig what Arthur does in the underground scene, with records by bands like Outer Heaven, Pissgrave, Black Curse,” Max explains. “Those are crazy productions, man. They’re off-the-wall and crazy-sounding. I wanted a Soulfly record with a sonic character like that, so Arthur was the perfect guy. At one point during the production, he came up to me and he was like, ‘You know Max, we’re not just doing another Soulfly record. We’re doing the best Soulfly record.’ I liked that attitude.”

Among the most prolific musicians in the genre’s history, Max led Sepultura from Brazil to the world stage, making fans out of Ozzy Osbourne, Deftones, and Dave Grohl along the way. He cofounded Nailbomb, Cavalera Conspiracy, Go Ahead And Die, and Killer Be Killed, issuing album after album to spirited acclaim from critics and fans. But no project is as singularly identified with Max as Soulfly, whose gold-selling self-titled debut arrived with unrivaled determination and spirit.

Soulfly, the moniker Max conjured, is an original portmanteau like "Lookaway” or "Straighthate.” The idea rose from one of the indigenous spiritual practices that inspire Max. "Many South American tribes believe the souls of their ancestors fly around them when they play music. They can even feel the souls of the animals sacrificed to create their instruments. It's heavy shit."

Loaded with multiple guests and instrumentation, Soulfly (1998) set a precedent for the records that would follow by managing the almost-magical feat of combining world music with metal without sacrificing the raw, authentic vibe of a band banging out songs in a basement. Twenty years on, Kerrang! included Soulfly's debut in their 10 Best Nü-Metal Albums Of All Time, alongside massively successful records by System Of A Down, Slipknot, Korn, Papa Roach, and Deftones. "I never felt Soulfly was a nü-metal band," Max points out. "We had elements of it. But by the time the sound went very commercial with Linkin Park, I didn't feel part of that. We're much heavier."

Melody Maker declared Primitive "the metal album of the year" in late 2000. When 3 followed in 2002, Spin wrote, "There's something undeniably thrilling about an Ozzfest demagogue who champions dignity as a human right and makes a maxim like 'Faith is a weapon' a rallying cry. The band remains a hard-charging, tribal-drumming monster fierce enough to kick the bulldozers out of the rainforest." Touring in support of 3 included a North American trek with Slayer.

Less than a year after its release, album four found its way into German magazine Rock Hard's 2005 book, The 500 Greatest Rock & Metal Albums of All Time. Sputnik Music praised Prophecy as "the best Soulfly album to date," calling it their "heaviest, most experimental, and most mature." Thrash-fueled power dominated Dark Ages (2005), Conquer (2008), and Omen (2010). Critics hailed Cavalera’s never-ending supply of riffs all over again with Enslaved (2012). They celebrated the fierce vibe of Savages (2013), the first Soulfly album with Max’s son, Zyon Cavalera, on drums.

Archangel pushed the musical bludgeoning to its very limit while injecting the songs with moments of trippy nuance and dissonance. Max revisited the ritualistic and mystical ruminations on Soulfly’s Prophecy while simultaneously doubling down on the most extreme music of his career. Ritual “retained the groove of early Soulfly as well as my love for the heavy, fast stuff,” Max explains. “I think, in the end, we created a cool mix of songs that covered a lot of ground in my career.”

The songs on Totem originated with a back-to-basics songwriting approach inspired by Max’s son, Zyon. Soulfly’s drummer since 2012, Zyon asked Max one day to show him how Sepultura created their early classics. The elder Cavalera describes the process as putting riffs together like pieces in a puzzle, or bricks in a pyramid. “Zyon and I jammed for many weeks, creating the foundation.”

Max first envisioned Soulfly as a band with an evolving lineup, eager to “shake the tree” with an infusion of new creative blood from time to time. Many amazing players and guest musicians appear throughout the discography. Totem is the band’s fourth album with Zyon and second with bassist Mike Leon. It’s also the first Soulfly album without guitarist Marc Rizzo since 2004.

“Some of my favorite records are ones where everything changed, and I had to find a way to make something work,” Max says. “A lot of my best records came from struggles, like Sepultura’s Chaos A.D., the first Soulfly album, and Prophecy.” Chris Ulsh of Mammoth Grinder and Power Trip plays a guitar solo in album closer “Spirit Animal.” John Powers, Rizk’s bandmate in the group Eternal Champion, contributes several solos to the album, and Rizk plays rhythm and lead guitars as well. “Arthur ended up jamming with me a lot on the record. He’s a great guitar player,” Max says.

Like every Soulfly album before it, Totem includes a dedication to God in the liner notes. And as ever, Max follows his spiritual muse into evolving and diverse territory, taking inspiration from multiple traditions and practices. Songs like “Superstition,” “Ancestors,” and the title track lean heavily into one of the album’s themes, which deals with nature as a spiritual force.

“I wanted to make a record connected to spirit animals, forests, environmental stuff,” he says. “I’ve always been fascinated by nature. Traveling so much, I’ve gotten to see some amazing places,” he continues, citing examples like Iceland, the fjords of Norway, and the Badlands of South Dakota. “Superstition” specifically is inspired by Superstition Mountain, located in Arizona. “Far beyond all the things that you know / superstition, harder than stone,” Max says in the song.

Each Soulfly album boasts an instrumental, which Max lovingly likens to a “Planet Caravan moment,” the way Black Sabbath’s classic jam created something of a mellow album oasis. Totem is no exception. “Soulfly XII” indulges Max’s love of dark ‘80s goth guitar chords and synths. “I try to get creative with all of them; either with different instruments, like the saxophone on the Ritual instrumental, or I go by vibe. This one is really influenced by The Cure and Sisters Of Mercy.”

Old school heaviness reminiscent of Sepultura’s Beneath the Remains era punctuates the environmentalist anthem “The Damage Done,” which concludes with a crushing decrease in tempo. “Scouring the Vile,” featuring a guest appearance from Obituary vocalist John Tardy, confronts cancer. “The sickening concealed behind my dying eyes / I ripped you from me.”

Roughly 25 years since the band began, essential Soulfly bangers like "Jumpdafuckup," "Back to the Primitive," "Downstroy," "Eye for an Eye,” “Ritual,” and “Dead Behind the Eyes” are celebrated live just like Cavalera classics "Roots Bloody Roots," "Refuse / Resist," "Territory," and "Dead Embryonic Cells." Bursting with hunger and energy forged by more than three decades as a heavy metal force, Totem is a suitably brutal, vibrant, extreme, and uplifting entry into the Soulfly canon.

Soulfly's savage anthems of aggression push extreme music to its bludgeoning limits while injecting it with brilliant moments of trippy nuance and dissonance. Like all innovative musical heroes, Max makes anthems for the people. Soulfly is a celebration of family and legacy. Whatever Max Cavalera hammers out on the bridges of his four-string guitars, it always sets souls free.

They have incorporated elements from African culture with Heavy Metal music, attracting the attention of international media such as CNN, Dutch TV, Swedish National Television, BBC and many more. Their releases Iklwa, Gauna, Dipoko Nyemba, Chief of the Ghosts and the most recent self titled album Skinflint pay homage to African spirituality, and mythology, while still playing in the vein of Traditional Heavy Metal, this has been seen as a pioneering example of African Metal.

The band has played shows in Southern Africa, Kenya and enjoyed successful tours as far as Sweden, USA, Switzerland, Germany and more since the signing with worldwide agency metalmusicbookings.com - Stay tuned for news of releases & shows coming soon!

CHAINED TO THE BOTTOM OF THE OCEAN

THE SONS OF MONTANA

The Sons of Montana's story is far from romantic. We are professional procrastinators, wading in the tides between risk and regret. We make noise and crooked smiles. Four socially inept misfits brought together by their desire to wage a rock and roll jihad, armed with high-gain feedback, lonely teenage hearts, and middle-aged debt. Get on the bandwagon or get run over by it.